Niobium is a chemical element or light grey, crystalline, transition metal of Group 5 (VB) of the periodic table with symbol Nb and atomic number 41. It is used mainly for making stainless steel and other alloys. 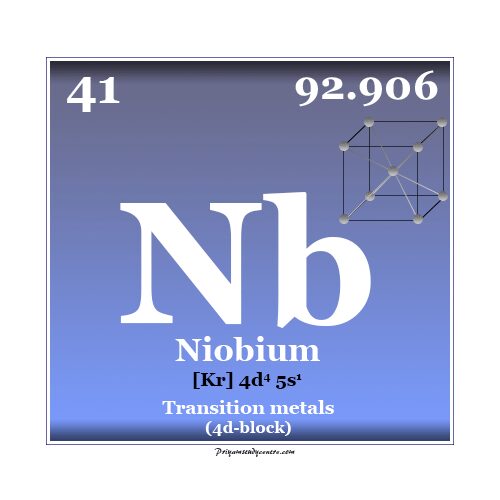 Where is niobium found?

Niobium is found in the earth’s crust to the extent of 20 ppm. Owing to the great chemical similarities with tantalum, it always occurs with tantalum.

The main mineral of the metal is columbite or tantalate with the chemical composition (Fe, Mn)M2O6, M = Nb, Ta. It is obtained as a byproduct of the extraction of tin in Malaysia and Nigeria.

Both niobium and tantalum are silvery-white bright metals with very high melting points. They are from the body-centered cubic crystal lattice.

They are malleable and ductile in a pure state. The high melting and boiling points of the metal indicate the participation of a large number of d-electron in metallic bonding. It is oxidized on heating in air and dissolved in fused alkali.

The 41 electrons of the niobium atom are distributed in different energy levels to show the following electronic configuration given below the picture, 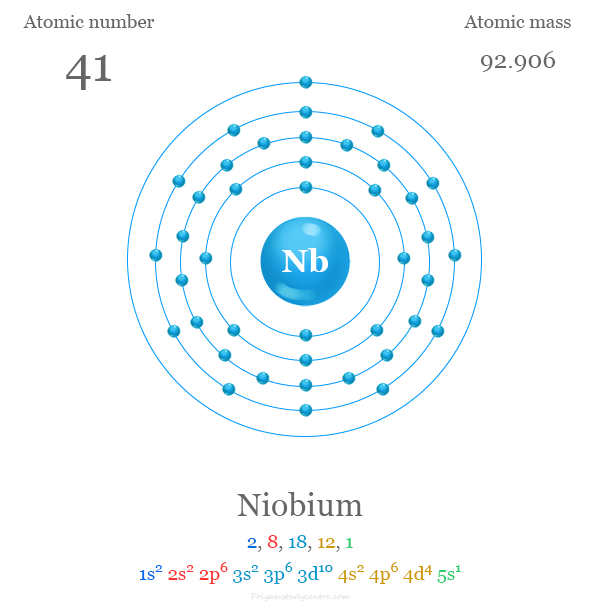 Nb in the periodic table

It is placed in group 5 and period 5 of the periodic table. Niobium is a transition metal or d-block element that lies between zirconium and molybdenum. 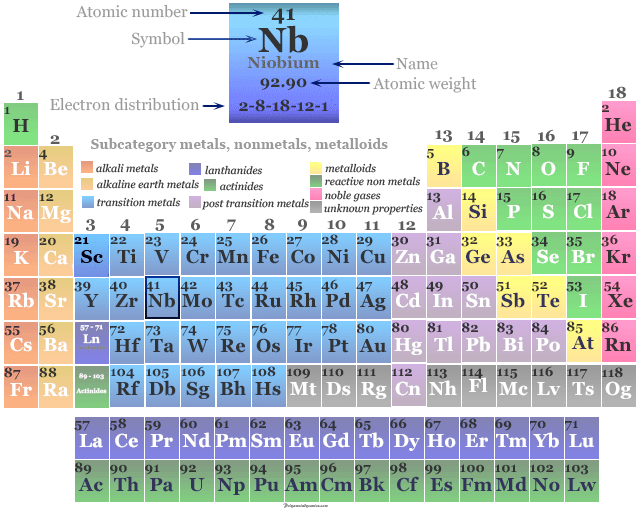 Niobium has one stable isotope like 93Nb. 32 radioactive isotopes ranging from 81 to 113 have been obtained by different types of nuclear reactions.

The effect of lanthanide construction makes the chemical properties like atomic and ionic radii of the two metals very similar. The chemistry of Nb and Ta is very similar but the electronic distribution is different.

It shows little cationic chemistry. The halides and oxohalides are the most important chemical compounds of the metal. These are mostly volatile and readily hydrolyzed.

Niobium oxide, Nb2O5 is obtained by heating the metal or its stable compounds in presence of oxygen. It is a white, high melting chemically inert solid practically insoluble in water or acids.

The various niobates are actually mixed oxides providing octahedral coordination around the metal.

The petahalides of niobium are obtained by direct reaction of the metals with halogens. NbF5 may be obtained by the reactions of the metal or metal pentachloride with fluorine. These are white solids and soluble in organic compounds like ether or carbon tetrachloride.

They are hydrolyzed to form gelatinous hydrous oxide. The oxohalides of niobium are formed by the reaction of petahalides with oxygen.

The transition metal niobium formed different types of complex compounds in different oxidation states. It formed mainly peroxo and halo complexes. Some examples of metal complexes are given below the table,

Niobium forms a large number of organometallic compounds by M-C σ-bonds and η-C2H5 bonds. The methyl compound of the metal is formed by the reduction of the pentahalides in the ether medium.

What is niobium used for?