Zirconium is a chemical element or silvery-white, hard, and high melting transition metal of Group 4 (IVB) of the periodic table with the symbol Zr and atomic number 40. It is placed in d-block elements with group members titanium and hafnium. It is used for making bullet-proof steel and other corrosion-resistant alloys. 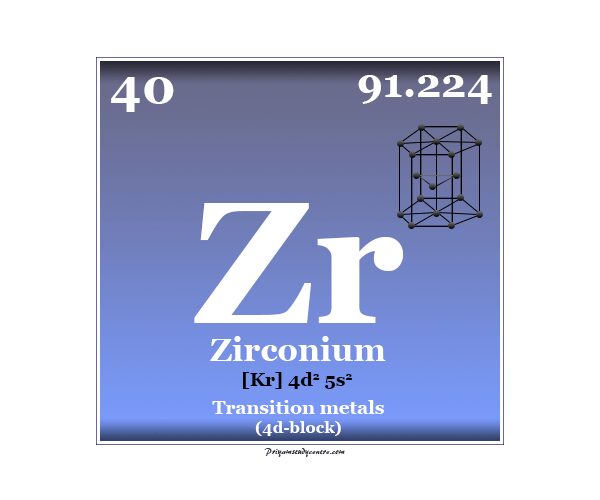 The zirconium mineral zircon occurs in a beautiful range of colour like golden, orange, and pink. These are used in gemstones from the early days of human civilization.

The most common oxidation number or state of zirconium is +4 (IV). The lower oxidation states of the metal are less common.

The mineral zircon has two main forms, hyacinth and jargon. The early analysis showed it was the oxides of silicon, iron, aluminum, and calcium.

In 1789, the German chemist Klaproth discovered the new element from zircon and named it zirconium. But the crude metal was first extracted in 1824 by Berzelius. Pure Zr metal was obtained by the van Arkel process in 1925.

The metal is fairly electropositive from dioxide on heating. The massive metal at room temperature is resistant to corrosion.

It dissolves only in hot concentrated sulfuric acid, aqua regia, and hydrofluoric acid. Hot aqueous alkali does not attack this transition metal. Some common properties of zirconium are given below the table,

The 40 electrons of the silver atom are distributed in different energy levels to show the following electronic configuration given below the picture, 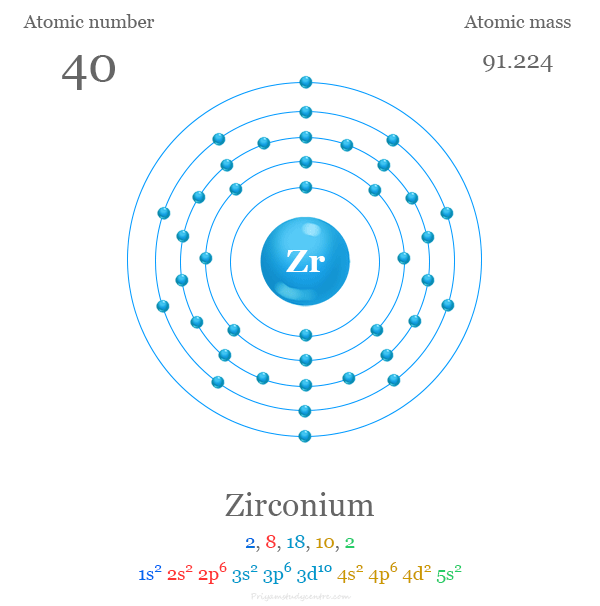 Zirconium in the periodic table

It is placed in period 5 and group 4 in the periodic table. Zirconium is a transition metal or d-block element that lies between yttrium and niobium. 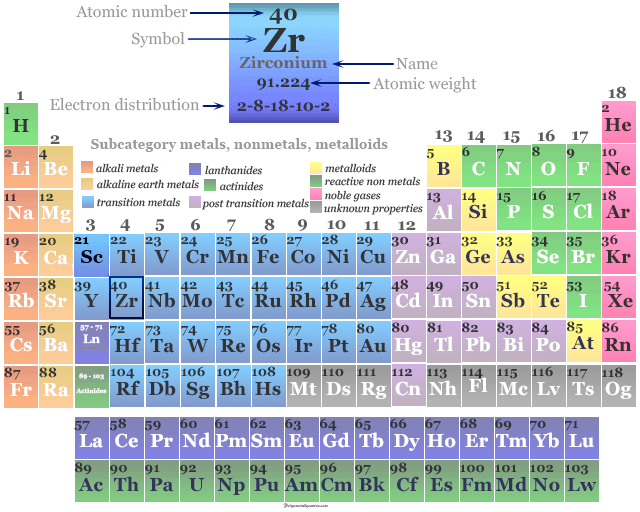 Where is zirconium found?

It is quite abundant metal ranking after transition metals iron, titanium, and manganese. It contains 0.016 percent or 162 ppm of the earth’s crust.

The principal commercial source of zirconium is zircon (ZrSiO4) and Baddeleyite (ZrO2). The minerals are found widely in Australia, Brazil, India, Russia, South Africa, and the United States.

Twenty-eight artificial isotopes of the metal ranging from atomic mass 78 to 110 can be prepared by different types of nuclear reactions.

It is produced by the Kroll process. The minerals are converted to chloride by heating with carbon and chlorine. The tetrachloride is reduced with molten magnesium.

Very pure zirconium is produced by the van Arkel process. The metal is heated with iodine in an evacuated vessel at 200°C. The volatile ZrI4 decomposes on an electrically heated filament at 1300 °C. The hafnium content has been reduced below 100 ppm which can be achieved by solvent extraction or ion exchange methods.

The most common and stable oxidation state of zirconium is +4 (IV). Zr+3 is strongly reducing in nature which reduces water molecule. Hence in the +3 state, it has no aqueous chemistry.

Zirconium oxide (ZrO2) is the most common solid oxide with a high melting point. It is insoluble in water, cold dilute acids (except HF), and alkalis. It reacts with acids slowly when heated for a long time and with alkali on fusion.

ZrO2 is used in making refractory crucibles and furnace linings. The white gelatinous hydroxide precipitate is obtained by adding alkali to Zr(IV) solution.

All four tetrahalides of zirconium are known and prepared by heating metal with halogens. All the halides are white solids. The unit cell of solid ZrF4 involves 2:8 coordination.

In the ZrF4 unit, each Zr atom is surrounded by eight fluorine ions in a square antiprism configuration. The tetrahalides are vigorously hydrolysis at room temperature and produced oxohalides which are stable to further hydrolysis.

Zirconium (IV) nitrate and sulfate are the basic salts of the metal. The sulfate compound is formed by dissolving ZrO2 in hot concentrated sulfuric acid. The anhydrous nitrate may be prepared by reacting N2O5 on ZrCl4.

A few unstable hydrocarbon derivatives like Li[Zr(Me)6] have been isolated from the reaction of LiMe and ZrCl4 at low temperatures.

Zr(benzyl)4 is a stable and homogeneous chemical catalyst in the Ziegler-Natta process. Cyclopentadine (Cp) forms a number of important compounds comparable to that of titanium. These are used as homogeneous catalysts for the production of many organic compounds.

Zirconium precipitated in routine quantitative analysis of Group-3 or Group-IIIA metals. With the addition of hydrogen peroxide (H2O2), a white precipitate of Zr peroxide (ZrO2, xH2O) appeared. Alizarin-S gives a red precipitate with the solution of metal in a strongly acid medium. The colour is discharged by the action of fluoride.