Tantalum is a chemical element or rare, hard, blue-gray, lustrous transition metal of Group 5 (VB) of the periodic table with the symbol Ta and atomic number 73. It is used for manufacturing capacitors and filaments in lamps. It has high density, extremely high melting point, and excellent corrosion resistance properties. 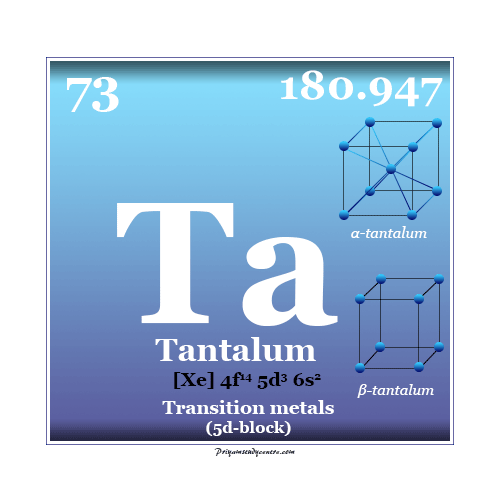 The high melting and boiling point of tantalum suggests the participation of a large number of d-electrons in metallic bonding. The element is relatively unreactive and resistant to all acids except hydrofluoric acid at ordinary temperatures.

Pure tantalum forms a body-centered cubic crystal lattice. It has similar chemical properties to that of niobium. 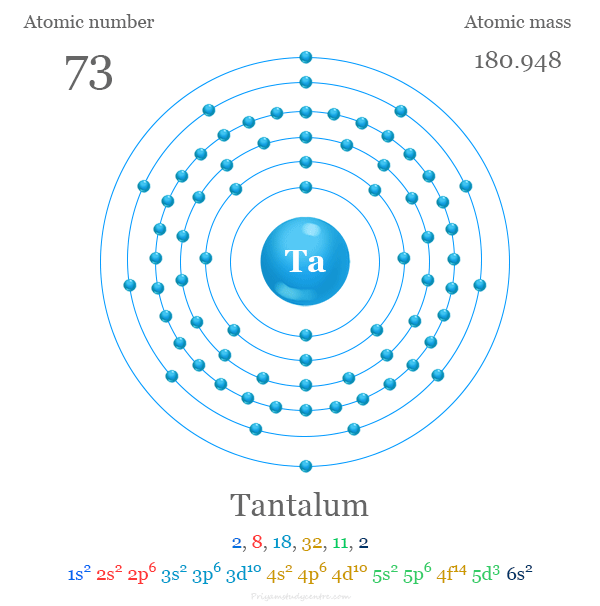 Tantalum on the periodic table 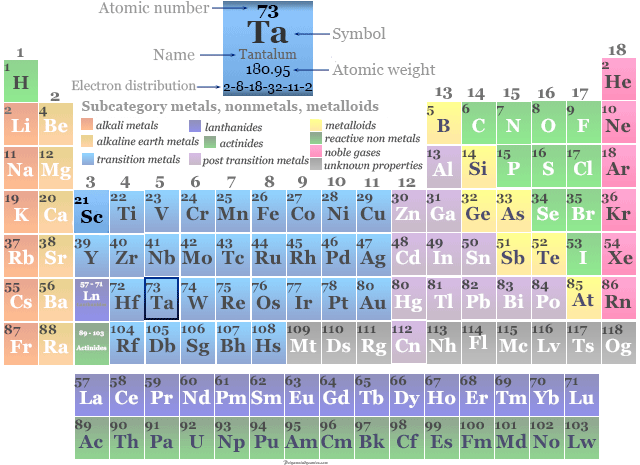 In 1802, Anders Ekeberg discovered an oxide of a new metallic element in Sweden that could not be dissolved in any acids. He named the metal tantalum after tantalus, a villain from Greek mythology.

In 1846, the German chemist, Heinrich Rose established that the chemical elements columbium and tantalum were chemically very similar and always occurred together. He renamed columbium, niobium (Niobe was the daughter of Tantalus), which was adopted by IUPAC in 1950.

In 1864, Christian Wilhelm Blomstrand and Henri Etienne Sainte-Claire Deville observed the solubilities of potassium flrorotantalate and fluroniobate in hydrogen fluoride. The pure form of Nb and Ta was obtained in 1907 (Werner von Bolton) by the reduction of flurometallates by sodium.

Where is tantalum found?

Tantalum is found in the earth’s crust to the extent of 1.7 ppm. Owing to the great chemical similarities with niobium, tantalum always occurs with niobium.

The main mineral of the metal is tantalate with the chemical composition (Fe, Mn) M2O6, M = Nb, Ta. It is obtained as a byproduct of the extraction of tin in Malaysia and Nigeria.

Tantalum has two natural isotopes like 180mTa (m = metastable) and 181Ta with the occurrence of 0.012 percent and 99.988 percent respectively. These isotopes are obtained generally by the isomeric transition, beta decay or electron capture nuclear reaction.

The radioactive half-life of these radioactive isotopes can not observe experimentally. These isotopes are used for the production of different types of short lives isotopes like 8Li, 80Rb, and 180Y.

Now a day, metals are produced by the solvent extraction process.

The transition element shows little cationic chemistry and forms a large number of anionic species. The halides and oxohalides are the most important chemical compounds of tantalum. They are mostly of volatile nature.

A large number of metal atom cluster compounds are known in the lower oxidation state of the metal.

The main chemical complex in the different oxidation states of tantalum is proxy and halo complexes. The oxidation state, geometry, coordination number, and examples of such complexes are given below the table,

It has extensive chemistry with organic compounds that involve Ta-C σ-bonds and η-C2H5 bonds. The methyl forms of the metal are stable compounds prepared by reduction of the penta-halides in ether medium.

TaMe5 may explode spontaneously at room temperature. The alkyls are Lewis bases that react with natural ligands or form anions.