Hafnium is a chemical element or silvery-white transition metal of Group 4 (IVB) of the periodic table with the symbol Hf and atomic number 72. It is used to make control rods in nuclear power plants due to its neutron absorbance. 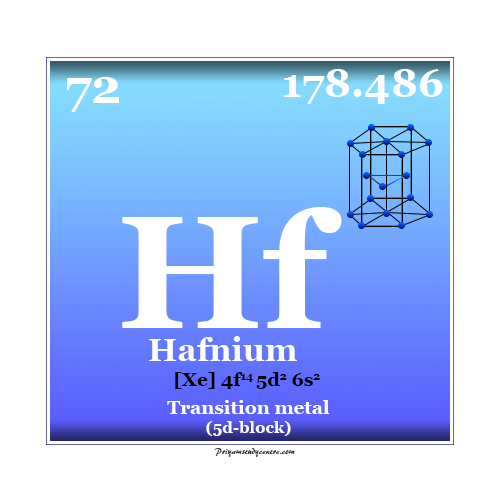 Niels Bohr convincingly advised Coster and Hevesy to look for the element with the atomic number 72. In honor of Bohr, the element hafnium was named after his native land Copenhagen whose old name was Hafnia.

Elemental hafnium was obtained by sodium reduction of its mineral. It was separated from zirconium by repeated crystallization. The pure metal was made in 1925 by decomposing hafnium tetra-iodide over a hot tungsten wire. 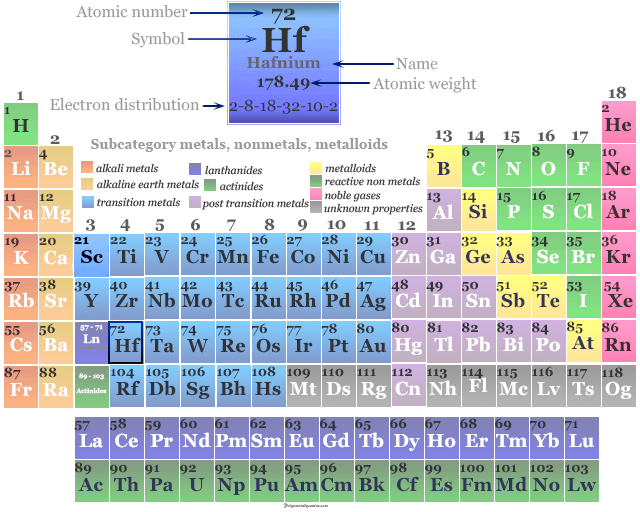 Where is hafnium found?

The metal was undiscovered till 1923. After 130 years the metal was discovered in zirconium mineral zircon. It occurs in nature much lower rank about 2.8 ppm.

Separation of zirconium and Hafnium

Zircon carries about 0.5 to 2 percent hafnium. Both the metal have the same atomic and ionic radii. Their charge by radius ratio is also the same.

The chemistry of these two transition metals is very similar. Therefore, no straightforward chemical methods can be derived for their separation or individual extraction. The hope lies in some slight differences in the solubility of their compounds.

The solubilities of (NH4)2[ZrF6] and (NH4)[HfF6] in water are 0.611 and 0.891 moles/liter at 0°C. Therefore, it is possible to separate these two compounds by repeated crystallization.

Elution of the metal tetrachloride

Anhydrous methanol solution of tetrachloride is passed through a silica gel column. The fixed chlorides were then eluted first with 2N hydrochloric acid in methanol. It removes zirconium chloride. Finally, elution is carried out with 7N sulfuric acid which removes hafnium.

Group-4 contains the transition metals like titanium, zirconium, and hafnium. In the past Th can be included in the place of Hf. But now, thorium goes to f block elements with actinides. 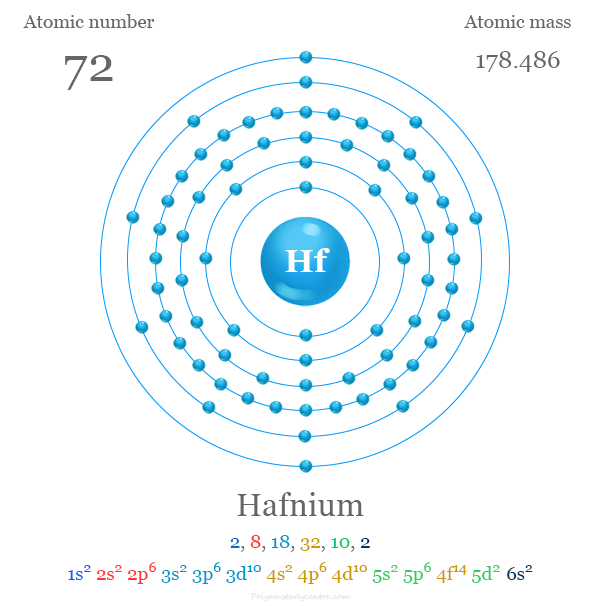 All the elements possess a d2s2 electronic configuration outside the noble gas core. The stable and most common oxidation number of these metals is +4. The lower oxidation states become increasingly unstable with the increasing atomic number. Zirconium (0) and hafnium (0) are known mostly in organometallic compounds.

The chemistry or chemical properties of zirconium and hafnium are very similar. Generally, it forms a hexagonal close-packed crystal lattice.

Due to zirconium impurities, the properties of hafnium are widely influenced by the zirconium atom. The size of Zr and Hf is very similar due to the lanthanide types of construction in the Hafnium atom.

The dioxide HfO2 is a high melting solid (mp – 2900 °C). It is insoluble in water or cold dilute acid except for HF. The oxide reacts slowly with acid when heating for a long time.

The tetrahalides of Ti, Zr, and Hf are formed by covalent bonding with halogens. They are non-electrolyte in nature and soluble in organic solvents. In the vapor state, these are monomeric and tetrahedral. The extent of hydrolysis decreases from Ti to Hf.

TiX4 compounds are hydrolyzed to give TiO2 in water. The compounds ZrX4 and HfX4 give ZrX2O and HfX2O in water.