What is chlorine dioxide?

Chlorine dioxide (chemical formula ClO2) is a yellowish-green gas or disinfectant which uses mainly for the treatment or production of drinking water. Chlorine dioxide is a toxic chemical compound that has serious side effects. Commercially, chlorine dioxide is produced by reacting sodium chlorate with sulfur dioxide or hydrochloric acid in a strong sulfuric acid medium. 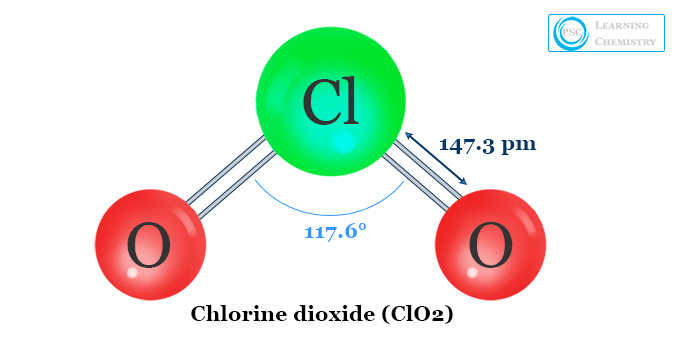 The yellow gas condensed to a reddish-brown liquid between 11 °C. Chlorine dioxide is soluble in water to form a yellowish-brown solution. It does not hydrolyze when enters into water. Strong acids can decompose chlorine dioxide into chlorine and oxygen. We used very small quantities of chlorine dioxide for the disinfection of drinking water. When used in large quantities, it should be dangerous for human health.

The explosive gas Chlorine dioxide may be prepared by heating potassium chlorate at 90 °C with moist oxalic acid. The liberated carbon dioxide can dilute the explosive gas. It makes advantages for the production of such chemical compounds.

How to make chlorine dioxide from sodium chlorite?

Commercially, the gas is manufactured on a massive scale by reacting sodium chlorate with a suitable reducing agent such as methanol, hydrogen peroxide, or sulfur dioxide in a strong acid medium. Hydrochloric acid is also used as a reducing agent but hydrochloric acid contaminates the product with chlorine.
2 NaClO3 + SO2 + H2SO4 → 2 ClO2 + 2 NaHSO4
2 ClO3− + 2 Cl− + 4 H+ → 2 ClO2 + Cl2 + 2 H2O

Methanol or hydrogen peroxide is the best reducing agent for ClO2 production because they do not co-produce elemental chlorine.

ClO2 formed bent type structure with O-Cl-O bond angle 117.6°. The O-Cl bond distance in the ClO2 molecule is 149 pm. It is slightly shorter than a single bond. Pauling represents the molecule that contains a resonance hybrid with three electron structures.

An alternative scheme of the three-electron structures with the odd electron residing on an oxygen orbital may also be worked out. The resonating hybrid is compatible with the sp3d hybridization of the chlorine atom. One orbital has the lone pairs and another makes the coordinate link to one oxygen atom. The third and fourth sp3d orbital makes a sigma and a pi bond with other oxygen atoms. The odd electrons remain located on the fifth sp3d orbitals of the ClO2 molecule.

It has 19 (2 × 6 + 7) odd electrons and a tendency to dimerize. No evidence of dimerization in solid, liquid, or gas phase or in solution.

The most common properties of chlorine dioxide are given below the table,

Chlorine dioxide is soluble in water to form dark green solutions up to 8 g/L in dark conditions. In presence of light, ClO2 decomposes solely to form HCl and HClO3. Crystalline clathrate hydrate may be obtained by cooling the solution.

It is a powerful oxidizing and chlorinating agent. Aqueous suspension of powdered metals (Mg, Zn, Ni, Cd, and Al) are converted to their chlorites by ClO2 at ordinary temperature and pressure.
Mg + 2 ClO2 → Mg(ClO2)2
Al + 3 ClO2 → Mg(ClO2)3

Chlorine dioxide is a powerful oxidant and disinfectant used commonly for the disinfection of municipal drinking water. Huge quantities of ClO2 are produced for bleaching wood pulp, cellulose, and textiles products. It is also used for making NaClO2. It can be used in manufacturing sites due to its explosive nature.

Present-day, chlorine dioxide is widely used for bleaching paper and textile industries. It produced cleaner and stronger fiber than chlorine. During bleaching, it does not produce harmful byproducts like organochlorine compounds.

Chlorine dioxide should be used widely as a disinfectant or oxidant. It is a very strong oxidizer and effectively worked in many disinfection processes. It kills pathogenic microorganisms such as fungi, bacteria, and viruses. We use ClO2 instead of chlorine because it prevents the formation of harmful halogenated disinfection byproducts like trihalomethanes and halogenated acidic acids.

It is less corrosive than chlorine and significantly controls several types of bacteria in the water treatment process. It is a very good water disinfectant than other secondary disinfectants. Therefore, chlorine dioxide is used in many water treatment plants such as cooling towers, water, and food processing plant.

The supplements which contain chlorine dioxide are likely to be unsafe for human health. We used a very small amount of ClO2 for the disinfection of drinking water used in the public sector. Acute ClO2, exposure can form chlorine gas which causes irritations and burns skin and eyes. It can be absorbed by the skin and damage the tissues and blood cells of our skin.