What is ozone layer?

Ozone layer or ozonosphere is a region found in the upper atmosphere that contains relatively high concentrations of ozone gas (O3) to protect the earth’s environment and its biosphere from harmful ultraviolet electromagnetic radiation. The region is lying in the stratosphere or between 20 km to 60 km above the earth’s surface. The thickest layer of ozone lies at a height of 23 km from the distance of earth’s surface. 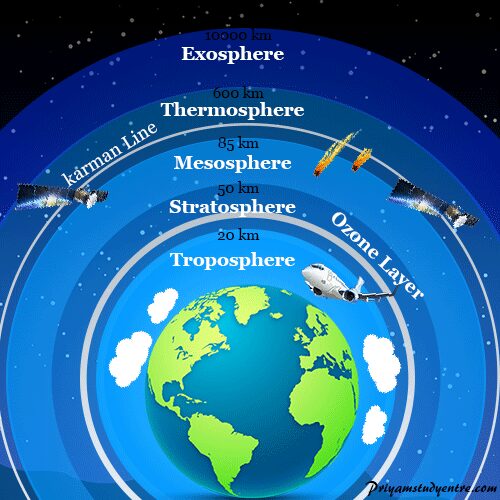 Ozone layer and its importance

If the protective ozone layer in the atmosphere completely disappears, then all the harmful ultraviolet radiation coming from the sun would reach the earth’s environment. It would cause skin cancer in humans or animals and damage all life on the green planet.

In 1980, scientists showed that there is a hole in the O3 layer. This hole was detected over the region of Antarctica. Due to the presence of ozone holes in the stratosphere, the concentration of ozone gas is reduced day by day. Unfortunately, several human activities permanently damage the ozone balance in the upper atmosphere.

Nitrogen dioxide (NO2) from supersonic aircraft, industrial chemical catalyst, and chlorocarbons (CFC) is the main source of ozone depletion in the upper atmosphere or stratosphere.

Photochemically nitrogen oxides (NOx) and chlorine atoms are continuously regenerated in the ozone depletion process that causing a permanent dame in the ozone balance.

Ozone depletion by oxides of nitrogen

The oxides of nitrogen present in the atmosphere decompose ozone gas into oxygen gas and continuously regenerate. Therefore, the presence of nitrogen dioxide destroyed the ozone layer found in the stratosphere. Present evidence suggests that the ClOx cycle may be three times more active to the destroyed ozone molecules than the NOx cycle.

Chlorofluorocarbons are the stable compounds of methane like freon-1 (CFCl3) and freon-12 (CF2Cl2). These are emitted from different types of organic spray aerosol, refrigerants, firefighting reagents, and solvents for cleaning electric components. When they enter the stratosphere, they absorbed ultraviolet radiation and get broken down into free atomic chlorine in a cycle process. This atomic chlorine continuously causes to depletion of ozone into oxygen in a cycle to damages the ozone layer.

Scientists are worried about the effects of gradual destruction or depletion of the ozone layer by the oxides of nitrogen and chlorofluorocarbons (CFC).

What is zinc sulfate? Zinc sulfate (chemical formula ZnSO4) is an inorganic compound of zinc that is used as a dietary supplement for treating zinc...