Molybdenum is a chemical element or strong and silvery transition metal of Group 6 (VIB) of the periodic table with the symbol Mo and atomic number 42. It is used mainly for making stainless steel and alloy steel for high-speed tools. 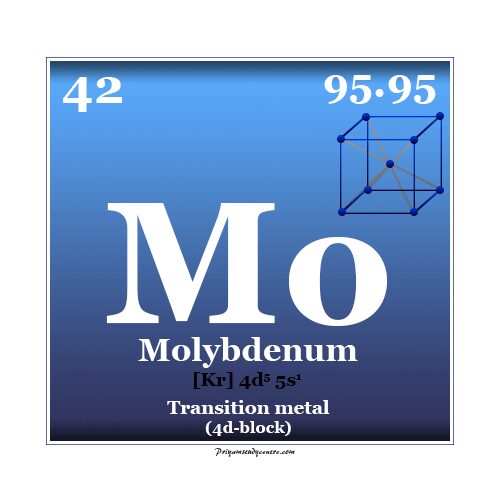 The name molybdenum is given from the Greek word molybdos meaning lead. It is the element in the second transition series in which all the d-electrons participate in metallic bonding. It is a d-block element, placed with chromium and tungsten on the periodic table.

The soft black molybdenite (MoS2) is the principal ore of molybdenum used for writing in the old time. It was similar to that of lead ore (galena or PbS) and graphite.

The mineral was first studied in 1754 by Swedish mineralogist A. Cronstedt. Following him, in 1778 Swedish chemist Carl Wilhelm Scheele observed that it was neither galena nor graphite. He prepared the oxide of molybdenum metal.

The pure metal was prepared by Berzelius in 1817 by reducing the oxide with hydrogen. The name of the metal is given from the Greek word molybdos meaning lead. 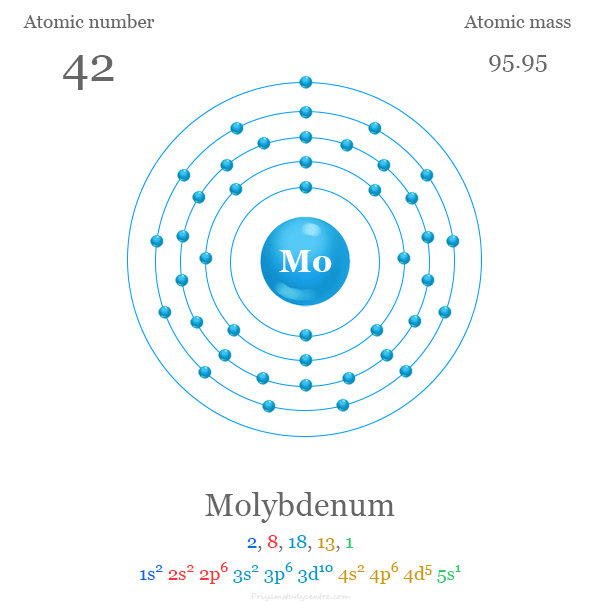 The atomic number of Mo is 42 and the valence shell electronic configuration [Kr] 4d5 5s1. The metal form is typically a metallic body-centered cubic crystal lattice. It is hard and relatively unreactive due to the protective surface film of oxide. 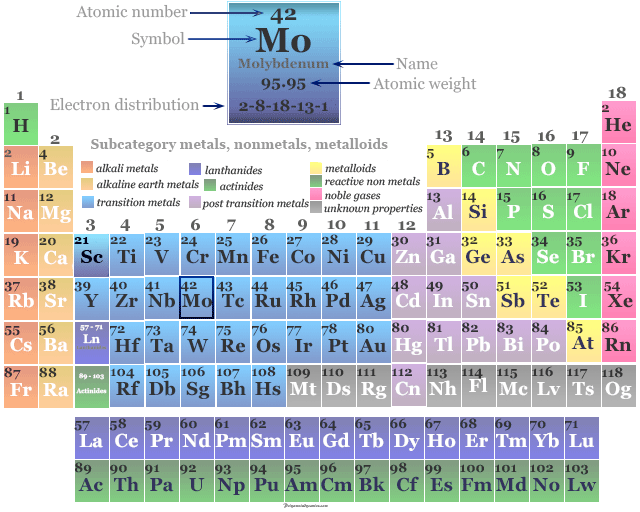 The metal molybdenum and tungsten have very poor amounts in the earth’s atmosphere.  It is the 54th most abundant element in the Earth’s crust with an occurrence of 1.5 parts per million.

The most important ore of Mo is molybdenite (MoS2). It is found mostly in Colorado (USA), Canada and Chile. Other minerals of the Mo metal are wulfenite (PbMoO4) and molybdite (MoO3).

It is also found in food grains, vegetables, and animal products. The richest source of molybdenum are legumes, whole grains, nuts, milk, and beef liver. It is the only element or metal in the second transition series which has natural biological functions.

Milk, cheese, and eggs are the main sources of molybdenum metal for children and teenage boys, and girls. Our daily drinking water also contains some amount of Mo-metal.

The radioactive isotopes of the metal are obtained by different types of nuclear reactions. 93Mo is the most stable radioisotope of the metal with a half-life of 4,000 years.

The metal has a very high melting point and is obtained initially in the form of molybdenum powder. It is converted to massive states by compression under hydrogen at high temperatures.

The chemistry of transition metals molybdenum and tungsten are very similar. The metals are slightly attacked by weak acids and bases. Both of them are dissolved in nitric acid – hydrogen fluoride mixture and in fused alkalies. The oxide compounds are acidic but the salts derived from acids are complex polyanions.

The common and stable oxidation states of these metals are +6 (VI). The oxidation states V and IV are also stable. Strong reducing properties of molybdenum are not observed before the III and II states. In the VI state, the metal forms oxides, oxoacids, hexafluorides, and hexachlorides.

Molybdenum forms hexavalent oxide like MoO3. It is precipitated from alkali molybdates by the addition of acids. The precipitated H2MoO4 may be ignited to form oxides. The oxide may also be prepared by ignition of metal in air or oxygen.

All the oxides are acidic and dissolved in alkali to give molybdates. The oxide CrO3 is highly oxidizing in nature. The oxides like MoO2 and WO2 have no oxidizing properties.

The lower oxide MoO2 was obtained by the reduction of trioxide with hydrogen. The acidic nature of the oxide decreases with the decreasing oxidation state.

With the high oxidation number, molybdenum halides are expectedly covalent in nature. Therefore, MoF6 is a low boiling, nonelectrolyte, diamagnetic, and extremely dissolved to hydrolysis. MoCl5 is monomeric in vapor state but a bridged dimer in the crystalline state. The lower halides are very complicated structures.

It forms monomeric MO4−2 anions in an alkaline medium. On acidification, the anions polymerize to give polyacids. These give rise to a complex like dioxomolybdenum(VI).

In a lower oxidation state, molybdenum forms Mo6X12 cluster compounds (where X = chlorine, bromine, and iodine). In this type of compound six Mo atoms form cluster-type compounds like (MoX8)+4X4−. The cyano complex may be prepared by reducing the Mo(IV) complex. It has a pentagonal bipyramid structure.

It is the only element or metal in the second transition series which has natural biological functions. More than thirty microorganisms, plants, and animals are known to contain the metal.

Vanadium Element Vanadium is a chemical element or shining silvery-white, low-density, transition metal of Group 5 (VIB) of the periodic table with symbol V and atomic...