Cobalt is a chemical element, lustrous silvery-gray ferromagnetic transition metal of Group 9 (VIIIB) of the periodic table with atomic number 27 and symbol Co. Finely divided metallic cobalt is pyrophoric like iron but compact metal is not attacked by air or water molecule at ordinary temperature. 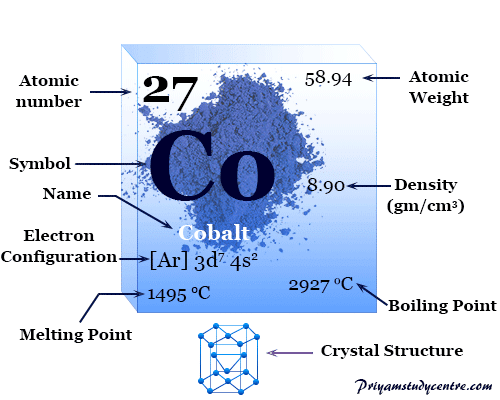 It is used in making different types of alloys, and large quantities of its compounds are used in the glass and ceramic industries. The hardness and tensile strength of cobalt are higher than steel.

The history of the discovery of cobalt may be started with its naming. The name of the metal given from the German word cobold means evil spirit or goblin.

In 1735, the Swedish chemist G. Brandt analyzed some specimens of the cobold and wrote about a new semi-metal which he named cobold. Brandit describes six semi-metals like mercury, bismuth, zinc, antimony, cobalt, and arsenic.

Before 1776, many scientists believed that the element was a compound of iron and arsenic. The identity of cobalt as a new metal was established around 1780 by T Bergmann and other scientists.

Where is cobalt found?

Cobalt is less common among the first transition metals except for scandium. It is the thirtieth most abundant element of all known elements that are found mainly with nickel and arsenic.

The principal minerals of cobalt are arsenides and sulfides like smaltite, CoAs2, erythrite, Co3(AsO4)2. Besides arsenic, sulfur and iron contain 4 to 10 percent of cobalt, and a varying amount of silver, copper, and lead.

South Africa and Canada are the main producers of cobalt. A small reserve of metal is found in Australia and Russian countries.

The hexagonal crystal lattice cobalt has a valence shell electronic configuration [Ar] 3d7 4s2. The +2 and +3 oxidation number or state is important to derive different types of chemical bonding and compounds of metal.

Co (II) is more stable than Co (III) in acid solutions. Finely divided metallic cobalt is pyrophoric like iron but the compact metal is not attacked by air or water at ordinary temperatures.

Some important physical and atomic properties of cobalt are given below the table,

Cobalt is placed on period-4 and group-9 on the periodic table with group members rhodium and iridium. It is a member of d-block elements or transition metals. 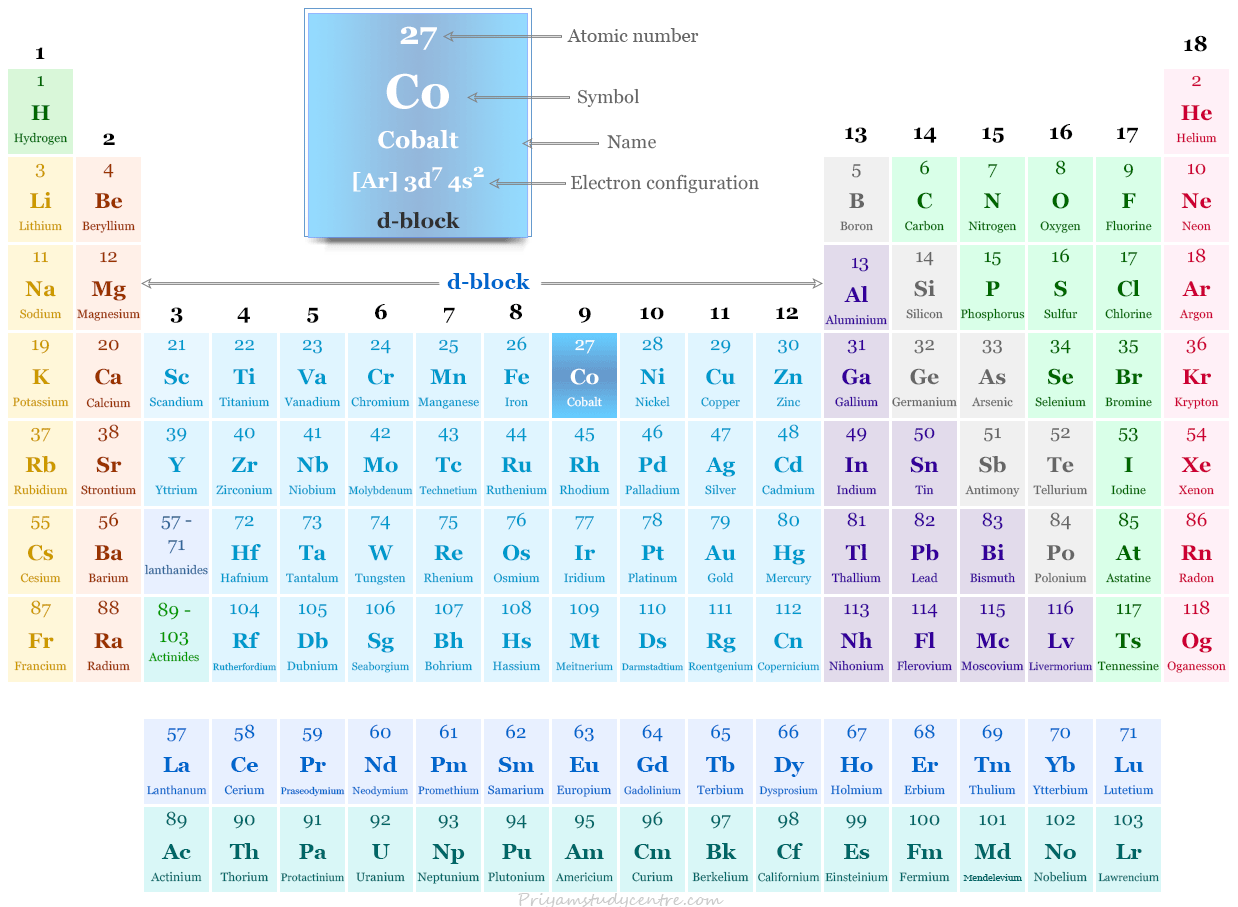 The oxidation state free energy diagram shows that the most common and important chemical compounds of cobalt are formed in +2 and +3 oxidation states. In an acid solution, Co (II) is more stable than Co (III).

Some important chemical compounds of metal are described below,

Cobalt (II) oxide (chemical formula CoO) is formed when steam is passed over red hot metal or Co (II) carbonate, nitrate, etc. The oxide is an olive green solid stable up to 1000 °C. When heated CoO in the air it formed Co3O4.

Co(II) oxide dissolved in concentrated alkali to form a deep blue solution of [Co(OH)4]−2. It has a rock salt structure. Normally the structure contains excess oxygen which behaves like a p-type semiconductor.

The brown hydrated Co (III) oxide is formed when Co(OH)2 is oxidized in an alkaline medium. It may be dried at 150 °C to the composition Co2O3, H2O. Further heating, forms Co2O3.

Oxidation of aqueous Co (II) in an alkaline medium by chlorine, oxygen, and ozone forms a black hydrous oxide CoO2, but this is not well characterized.

Several mixed oxide species of cobalt are formed in the +4 oxidation state. For example, M2CoO3 (M = K, Rb, Cs), Li8CoO8 and Ba2CoO4.  The last compounds have the same structure as K2SO4.

It is prepared by heating Co(OH)2 with Ba(OH)2 or BaCO3 in oxygen at 1050 °C. Similarly, the fusion of CoO4 with NaO2 produces Na4CoO4. It contains the tetrahedral CoO4 anion with Na+ cation coordinated to oxygen atoms.

A compound like Cs2CoF6 is prepared by fluorination of Cs2CoCl4. It is isomorphous with Cs2SiF6.

The halide like CoF2 is made by heating the double salt (CoF2, 2NH4F) or by the action of HF on CoCl2. The other halides of Co (II) are obtained by direct reaction of cobalt metal and halogens like chlorine, bromine, and iodine.

Cobalt (III) fluoride is a light brown powder having the chemical formula CoF3. It is obtained by heating CoF2 or CoCl2 in fluorine.

CoF3 violently reacts with water by evolving oxygen. It is a strong fluorinating agent which fluorinates hydrocarbons to form fluorocarbons.

In the +3 state, Co has a d6 configuration which gains the advantage of large crystal field stabilization energy (CFSE) with strong field ligands.

Werner shows that Co (II) forms a series of amine complexes and the orange hexamine, [Co(NH3)6]+3 is readily formed by aerial oxidation of aqueous Co (II) in presence of ammonia and ammonium salts.

The low oxidation state of cobalt ( 1, 0, and −1) are found with strongly pi-bonding ligands like carbonyl (CO), nitrosyl (NO), and cyanogen (CN−) ion.

How to detect metal?

Cobalt metal may be detected conveniently by the deep blue color produced in borax beads which remains unchanged in reducing flame.

Before the 19th century, large quantities of cobalt compounds are used in glass and ceramic industries. Today it is used in different fields like alloys or battery making and chemical catalyst.