Lead is a chemical element or group-14 metal of the periodic table with the symbol Pb and atomic number 82. It has been used in plumbing in Roman civilization. Now, it has been stopped due to lead poisoning. 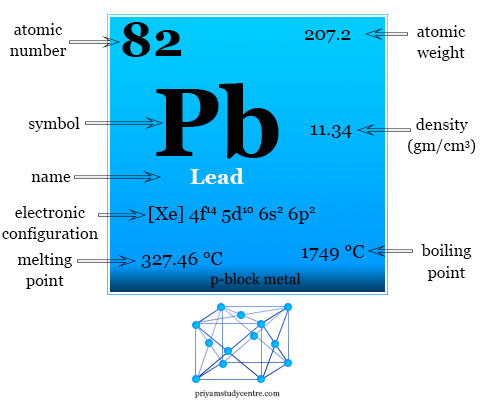 Lead is used for making storage batteries and antiknock compound (lead tetraethyl) to control air pollution. It exists in a cubic closed-packed crystal lattice with a density of 11.34 g/cm3. Lead is soft, malleable post transition metal.

The low melting point of lead suggests the fact that all four valence electrons in Pb do not participate in metallic bonding. +2 oxidation number is common for lead rather than +4.

Where is lead found?

It is found at 13 to 16 ppm in the earth’s crust. Galena (PbS) is the main source of lead metal. The other minerals which contain Pb(II) are anglesite (PbSO4) and cerussite (PbCO3).

United States, Russia, Australia, and Canada are the major producer of Pb metal. In India, galena contains about 3 percent of Pb and a little amount of Ag. It is obtained from the Zawar mines at Udaipur in Rajasthan.

The chemistry and properties of group-14 elements follow from their electronic configuration. All the elements have an outermost quantum shell with an s2p2 configuration.

Lead exists in a face-centered cubic close-packed crystal lattice with a density of 11.34 g/cm3. It is a low-melting metal because it cannot use all four valence electrons for metallic bonding.

Lead in the periodic table

Tin is found in period 5 and group 14 or the carbon family of the periodic table. 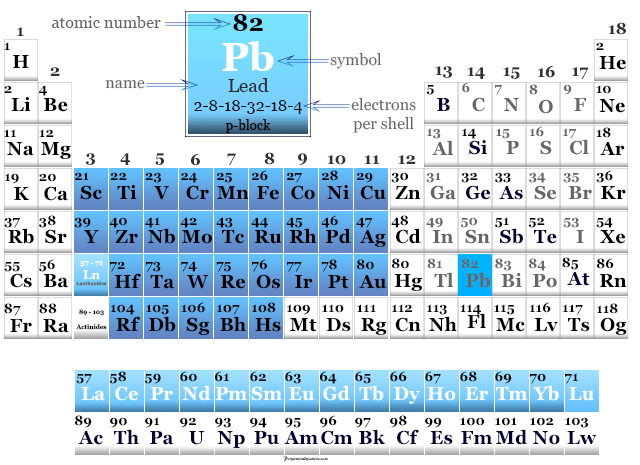 Lead is a p-block element that lies in between tin and flerovium in the periodic table.

Naturally, lead has four stable isotopes with mass numbers 204, 206, 207, and 208. Three of these four isotopes are found in the radioactive decay series. It is the first heaviest element whose natural isotopes are stable.

The relative abundance of these isotopes is given below the table,

The crude metal contains many impurities like Cu, Ag, Au, Zn, As, Sb, and Sn. It is purified by the electrolysis process.

In spite of their ns2 np2 valence shell electronic configuration, the lighter elements like C or Si of group-14 do not have any bivalent compound under ordinary conditions.

The bond energy values decrease significantly in heavier elements like Pb. Therefore, bivalent compounds are comparatively more stable at room temperature. The stability of group-14 hydrides (MH4) decreases from Ge to Pb due to decreases in M-H bond energy.

Yellow solid PbF4 is the only stable tetrahalide of Pb. It is decomposed to PbF2 and F2 on heating. It can be prepared by the action of fluorine or HF on lead compounds. Other tetrahalides are less stable and PbI4 does not exist.

The dihalides of lead are stable crystalline solids slightly soluble in cold water but much more soluble in hot water. PbCl2 and PbBr2 give photosensitive depositing electromagnetic spectrum radiation.

Pb (II) oxide or PbO2 is prepared by dissolving Pb3O4 in a dilute nitric acid solution. It is a strong oxidizing agent and decomposes to PbO at a temperature above 300 °C.

PbO is another oxide of metal that exists in two forms, litharge, and massicot.

PbO is basic in nature and dissolves in acids to form Pb(II) salts. It has an unusual layer structure in which four oxygen atoms form a base of the square pyramid with Pb metal at the vertex.

Lead (II) carbonate occurs in nature as cerussite with the chemical formula PbCO3. It is precipitated from Pb(NO3)2 solution by NaHCO3 at a low temperature.

It has been used as a white pigment under the name white-Pb. But it is now getting substituted very fast by TiO2 due to the non-toxic nature of TiO2.

Lead acetate or Pb(CH3COO)2 is a white crystalline chemical compound with sweetness in taste. It can be made by boiling Pb with acetic acid and hydrogen peroxide.

It is used in medicine for washing the eye. It is also used for making other lead compounds and mordants in the dyeing process.