Selenium is a group-16 chemical element on the periodic table with the symbol Se and atomic number 34. It is placed with group 16 elements such as oxygen, sulfur, tellurium, and polonium. Selenium uses mainly for making decolorized glass, photoelectric cells, and semiconductor devices. 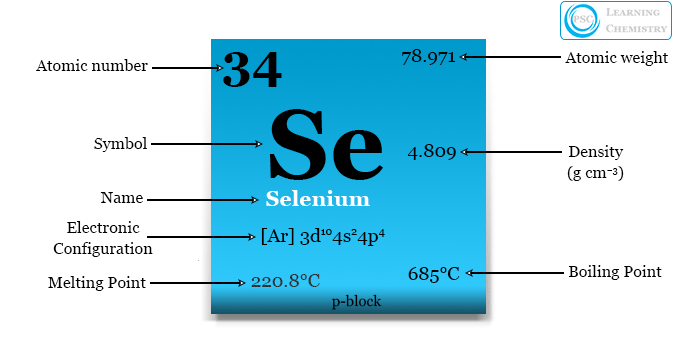 Selenium formed a selenide mineral with sulfides of copper, silver, mercury, and nickel. The element selenium has properties of nonmetal. Selenium is recovered from the anode mud obtained in the electrolytic refining of copper.

Selenium is a trace mineral found in several foods and necessary for cellular function in many animals. It is an essential component of various enzymes and proteins.

The name selenium was derived from the latter ‘selene’ the Greek name for the Moon. It was discovered by Jöns Jacob Berzelius and Johan Gottlieb Gahn in 1817.

It forms five, six, seven, and eight-membered rings but they are readily converted to more stable chains. Infinite long chains are present in some solid nonmetals.

It has common rhombic and monoclinic forms with Se8 puckered rings. Both forms are unstable and slowly change to gray polymeric forms with infinite chains.

It is found as selenide minerals along with sulfides of copper, silver, mercury, nickel, etc. Commercially, most of the selenium is obtained as a by-product of copper extraction and purification.

Natural foods are also other sources of selenium which is required in many biological or cellular functions. Plants can obtain it from soil and animal gain it from plant sources.

Proteinous foods such as brazil nuts, finfish, shellfish, beef, turkey, chicken, fortified cereals, whole-wheat bread, beans, and lentils are the main sources of selenium that are required for many biological processes.

Selenium is produced mostly from the anode mud obtained from the electrolytic refining of copper. The dried mud contains about 3 to 28 percent Se.

It has properties to form several types of allotropes. Gray selenium is the only important allotrope of the element. It has infinite spiral chains of atoms.

The viscosity of molten selenium decreases rapidly because long-chain split into smaller ones by increasing temperature. A highly polymeric form is obtained by pouring molten Se into cold water.

Many chemical properties of selenium are given below table,

Hence, sulfur is an insulator, selenium and tellurium are semiconductors, and polonium is a metal.

Selenium in the periodic table

The electronic configuration of nonmetal Se is [Ar] 3d10 4s2 4p4. Therefore, selenium is found in Group-16 and period-4 in the periodic table.

It is a p-block element present below the sulfur and above tellurium. 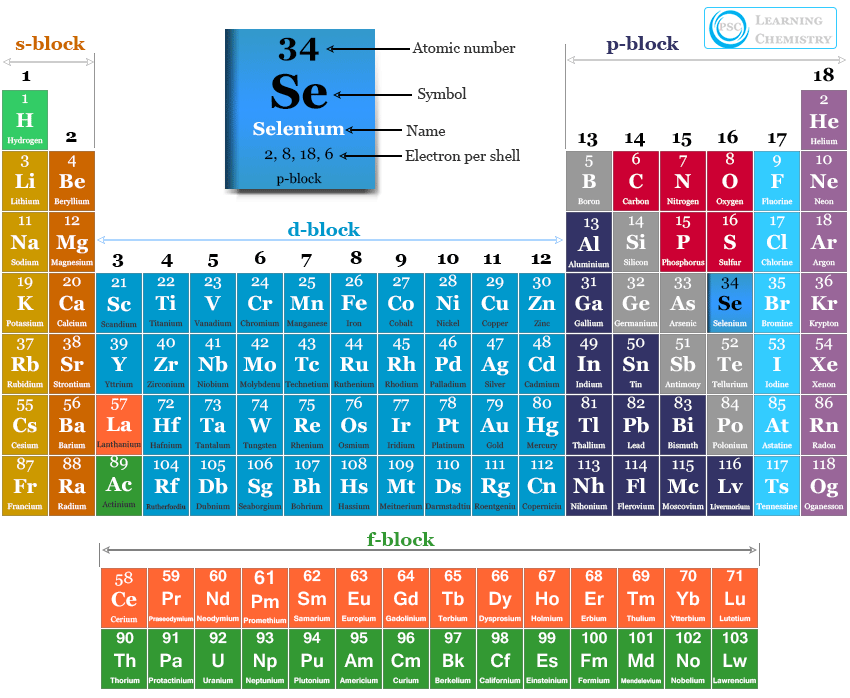 The elements of group-16 or chalcogens have just two electrons short of the next noble gas configurations. Therefore, the −2 oxidation state is the most common oxidation state of Se.

Hydrogen selenide can be obtained by the hydrolysis of aluminum selenide in water or diluting non-oxidizing acid.
Al2Se3 + 3 H2O → 3 H2Se + Al2O3

The hydride can also be produced by heating finely powdered selenium with long-chain hydrocarbon at 300 to 400 °C. It is used in synthetic organic chemistry for the dehydrogenation of hydrocarbons. H2Se is more soluble in water than H2S.

Selenium dioxide forms colurless sublime crystals which melt under pressure at 340 °C. It is highly soluble in water. The evaporation of water solution forms colurless hexagonal crystals of selenous acid.

It is less stable than SO2 and easily reduced to Se by SO2. SeO2 is used largely in organic chemistry as an oxidizing agent.

The trioxide (SeO3) is formed along with dioxide on passing an electric discharge through a mixture of selenium vapour and oxygen under low pressure. It is the anhydride of H2SeO4. In solid-state, it contains a cyclic Se-O-Se trimer.

Selenic acid forms white deliquescent crystals which readily lose water on heating. The aqueous solution of selenic acid is a strong acid that dissolves metals like copper, silver, gold, and palladium. It liberated hydrogen with zinc.

It is a trace mineral that does not produce in the body but is required in many cellular functions. It is commonly controlled thyroid and immune system function in our bodies.

It is an essential part of various enzymes and proteins such as selenoproteins. The main functions of selenium are,

Selenium is an essential element and deficiency causes several types of health problems in living organisms. An excessive amount may be toxic that cause selenosis.