Fluorine (chemical symbol F), chemical formula F2, atomic number 9 is the most electronegative and most chemically reactive member of the halogen family or Group 17 of the periodic table element. 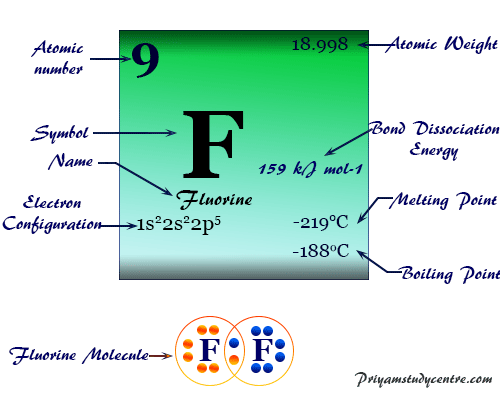 Due to high reactivity and the small size, fluorine combines directly with metal, almost all nonmetal, and noble gases. The reactions with many elements are vigorous and sometimes explosive. The exceptionally high reactivity of fluorine is assigned due to low F-F bond energy ( 159 kJ mol−1). It is gradually decreasing in other members of the group (chlorine, bromine, and iodine).

Fluorine on the periodic table 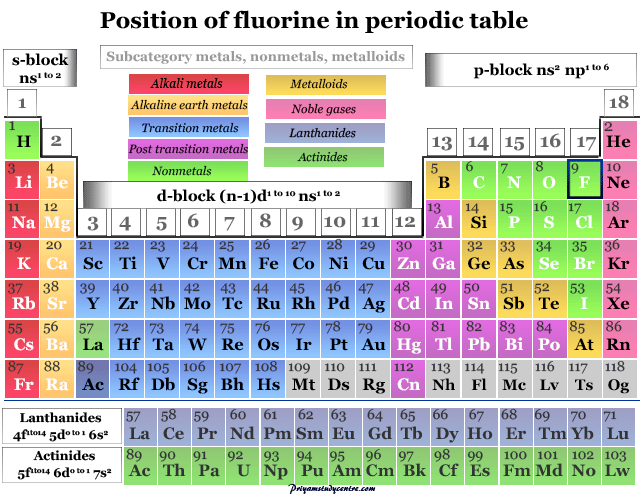 It is placed on group-17 (VIIB) on the periodic table with the halogen family. The chemistry and periodic table position of halogens follow their electronic configuration. All the elements have seven electrons in the valence orbitals.

The name of the chemical element fluorine origin from the mineral fluorspar (CaF2) suggested by French physicist André-Marie Ampère in a letter to Davy (1812).

In 1771 the Swedish chemist Carl Wilhelm Scheele discovered corrosive compounds hydrofluoric acid (HF) by heating fluorspar with concentrated sulfuric acid in a glass retort but it could not be used for isolation of fluorine due to several difficulties.

For more than 150 years, all the chemical preparation methods had failed to produce F2, success of discovery has come in 1986 by American chemist Karl O. Christe through the reaction of K2MnF6 and antimony pentafluoride (SbF5). Both the chemical compounds are obtained by using hydrogen fluoride.

None of the halogens are found free in nature owing to their high reactivity. It occurs in the earth’s crust to the extent of 0.065 percent (544 ppm; thirteenth in abundance) which is higher than that of chlorine (0.055 percent, 126 ppm, twentieth in abundance).

The most common minerals found in the earth’s environment concentrated with fluorine elements are fluorite or fluorspar (CaF2), cryolite (Na3AlF6), and fluorapatite[3Ca3(PO4)2, CaF2].

Where is fluorine found?

The principal fluorine-containing minerals (fluorspar) are found in different parts of the world like India, Illinois, Kentucky, Derbyshire, southern Germany, the south of France, and Russia. Greenland is the chief source of mineral-like cryolite (Na3AlF6). In India, fluorite occurs in Chhattisgarh (Drug, Raipur, and Jabalpur) in Rajasthan (Jaipur, Ajmer, and Kishangarh).

Preparation of fluorine by electrolysis

French chemist Henri Moissan 1886 prepared fluorine by electrolysis of potassium fluoride (KF) with anhydrous hydrofluoric acid in a U-tube of platinum with a platinum-iridium electrode. He received the Noble prize in chemistry in 1906 for the production of chemical elements. Due to its toxic characteristics, the progress of fluorine chemistry is very slow.

Anhydrous hydrofluoric acid is a nonconductor of electricity while an aqueous solution produces ozonized oxygen on electrolysis. No chemical oxidizing agent was able to oxidize a fluoride compound or hydrofluoric acid.

The decomposition of fluoride compounds gives fluorine gas but the process is unlikely from the thermodynamic point of view since the compounds have high lattice or bond energy.

It is now prepared by electrolysis molten mixture of potassium fluoride and hydrofluoric acid in a mild cell acting as the cathode and the anode is the central rod of nongraphitic carbon separated from the cathode by the porous diaphragm.

Fluorine is a faint yellow-greenish gas at an ordinary temperature that turns into a yellow liquid after cooling. It has only one stable isotope 19F or F-19. In the vapour state, it normally exists as a diatomic molecule (F2) with a melting point of −219 °C and a boiling point of −188 °C. F2 molecule is formed by weak Van der Waals attraction.  In the solid phase, it forms layers of the crystal lattice.

Fluorine is the most electronegative chemical element in the periodic table. It always assigns a −1 oxidation number and introduces polarity in hydrogen fluoride molecules. The hydrogen fluoride molecules are associated via intermolecular hydrogen bonding. The chemistry and periodic table position of fluorine can be described by its electronic configuration which is one electron short of the next noble gas.

Some of the interesting facts about higher halogens can be explained only by considering the participation of d-orbitals in chemical bonding. Some facts about fluorine are explained below,

Both these facts permit a maximum number of small fluorine atoms without accumulation of excessive charge density on central atoms such as SF6, OsF6, [SiF6]2−, IF7, etc.

What is fluorine used for?