What is hydrogen sulfide? 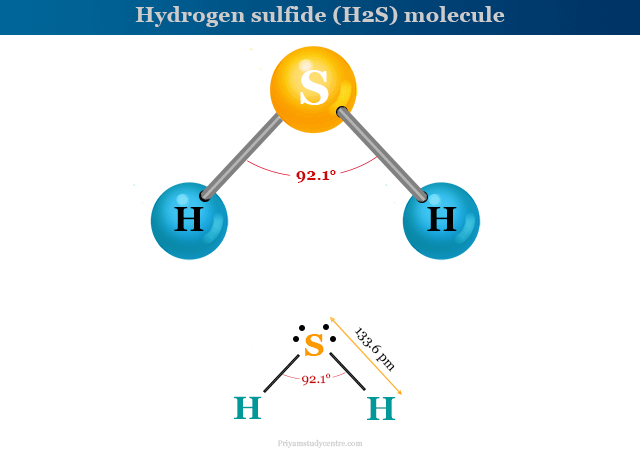 Hydrogen sulfide is a highly toxic gas or broad-spectrum poison for humans and animals. It can affect the respiration or nervous system of our body.

The effects of hydrogen sulfide poisoning are comparable to carbon monoxide poisoning. Carbon monoxide binds to iron in hemoglobin to form carboxyhemoglobin complexes to prevent the transport of oxygen from the lungs to our cells. Hydrogen sulfide also binds to iron in the mitochondrial cytochrome enzymes to prevent cellular respiration in our body.

It is formed by sp3 hybridization of the sulfur atom which binds with two hydrogen atoms by forming a bond angle of 92.1° and bond length 136.3 pm.

Where is hydrogen sulfide found?

It is found naturally in crude petroleum, natural gas, and hot springs. The H2S occurring in the hot springs arises due to the hydrolysis of sulfide minerals.

Bacterial breakdown of organic materials and human wastes produced some part of H2S in our environment. Industrial activities such as petroleum or natural gas refining, wastewater treatment, and paper mills are also the other sources of H2S to our environment.

How to make hydrogen sulfide?

In the laboratory, hydrogen sulfide can be made by the action of non-oxidizing acids such as hydrochloric acid (HCl) on iron sulfide (FeS).
FeS + 2 HCl → FeCl2 + H2S

A direct combination of hydrogen and sulfur at elevated temperatures also gives hydrogen sulfide. The reaction mixture is cooling to 60 °C. It may be liquefied and then purified by distillation.

It can be prepared by heating a mixture of solid sulfur with hydrocarbon like alkane or paraffin (CnH2n+2). It is a convenient method for the making of hydrogen sulfide in the laboratory.

The poisonous gas hydrogen sulfide is slightly denser than air. It burns in oxygen to form a blue flame. Some common properties are given below the table,

The hydrogen sulfide gas is soluble in water to form a 0.1M solution. Therefore, H2S is a weak dibasic acid with pka1 = 10−7 and pka2 = 10−15. The concentration of H2S, HS−, and S− depends on the addition of acid or alkali to the saturated solution of H2S.

In an acid solution, the standard potential of the S/H2S couple is +0.14 volt. Therefore, H2S can be readily oxidized to sulfur by the addition of a large number of oxidants such as potassium permanganate (KMnO4), potassium dichromate (K2Cr2O7), nitric acid (HNO3), etc.
H2S + 2 HNO3 → S + 2 NO2 + 2H2O

Separation of metal ions becomes possible by precipitating the metal sulfides with hydrogen sulfide. Experiments show that the S−2 concentration in a saturated solution of H2S and 0.3 M HCl is just high enough to precipitate insoluble sulfides like HgS and CuS.

Polysulfides are formed when sulfur is boiled with a solution of alkali sulfide. The solution changes its color from yellow to dark red. Disulfide (S2−2), trisulphide (S3−2) tetrasulfide (S4−2), and pentasulphide (S5−2) are the common examples of polysulfide.

An acidified polysulfide solution gives free hydrides such as H2S2, H2S3, H2S4, etc. The density, viscosity, and boiling point of such hydrides increase with the increasing chain length.