Acetylene or ethyne is a colorless gas with the general molecular formula C2H2 when combustion with oxygen to form a luminous smoky flame due to the high carbon materials. 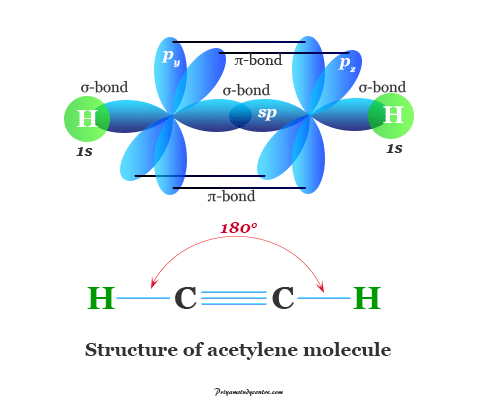 It is used in oxy-acetylene torches, oxy-acetylene blowpipes for cutting metals, or welding equipment. It is also used for the preparation of a large number of compounds like acetaldehyde, ethyl alcohol, and acetic acid.

Acetylene gas is sparingly soluble in water but readily soluble in an acetone solution. The compressed or liquified unsaturated hydrocarbon like acetylene is a highly explosive gas. Acetylene is stored with acetone solution under 10 atm pressure because acetone absorbs some porous materials for settings the safety of the cylinder or suppliers tank.

The Lewis structure of the acetylene setup by one triple bond is known as the acetylenic chemical bond. The infrared region of the electromagnetic spectrum of ethylene compounds depends on whether they contain acetylenic hydrogen or not.

The gas is prepared by creaking methane or ethane mixture. Heating a mixture of ethane or propane with the stream at about 1000-1300 °C temperature.

Natural gas or hydrocarbons are used as the starting material for the preparation of C2H2. It may be prepared by following synthesis methods given below the picture,

Acetylene is an important member of the alkyne that is prepared industrially by the action of water on calcium carbide.

Other methods for the preparation of the alkynes in learning chemistry are, 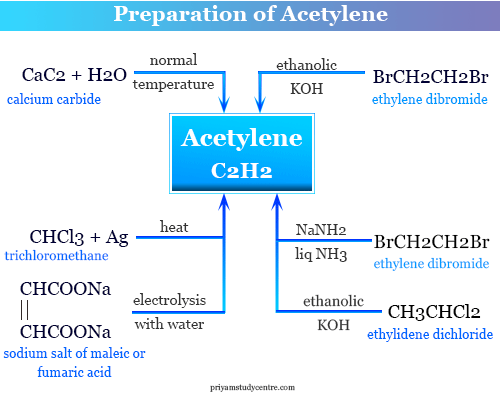 It can be produced by the electrolysis of the concentrated sodium or potassium salt of the maleic or fumaric acid solution by the Kolbe method.

Ethylene is also prepared by the action of ethanolic potassium hydroxide on ethyl bromide solution. The reactions process in two steps.

Owing to the presence of a triple bond, it is more unsaturated hydrocarbon than ethylene. It formed addition products with two or four univalent atoms or groups. The triple bond consists of one sigma and two pi-bonds to form a linear molecule.

When two univalent atoms add to the triple bond, the diagonal arrangement changes into the trigonal or tetrahedral arrangement. Therefore, under suitable conditions ethylene uses to isolate the intermediate alkene or olefins like ethylene with trigonal structural formula.

CH≡CH adds to the hydrogen atom in the presence of the chemical catalyst. The reaction process in the two stages by the preparation of alkenes and alkanes.

What is hydrogen peroxide? Hydrogen peroxide molecule has molecular formula H2O2 having an interesting skew structural unit. It is used widely in industrial solutions and...