Scandium is a chemical element or transition metal of Group 3 of the periodic table with atomic number 21 and symbol Sc. The common oxidation number or state of scandium is +3 due to the presence of three valence electrons. 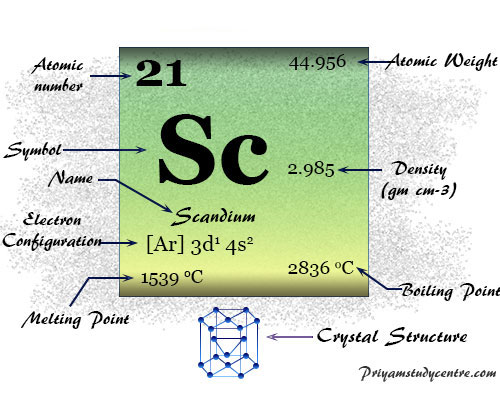 Sc is a silvery-white, moderately soft metal. It usually occurs with lanthanides due to the lack of the characteristics of transition metals.

Where is scandium found?

In the earth’s crust, scandium is not rare, it is found with the lanthanides and uranium ore (0.02 percent of Sc2O3) which may be obtained as a by-product. Thortveitite (Sc2SiO7) is a mineral of scandium found mostly in Norway.

Scandium on the periodic table

Scandium, yttrium, and lanthanum constitute group-3 of the periodic table. They are the beginning members of the first three transition series. They have a d1 s2 electronic configuration over a closed noble gas shell. 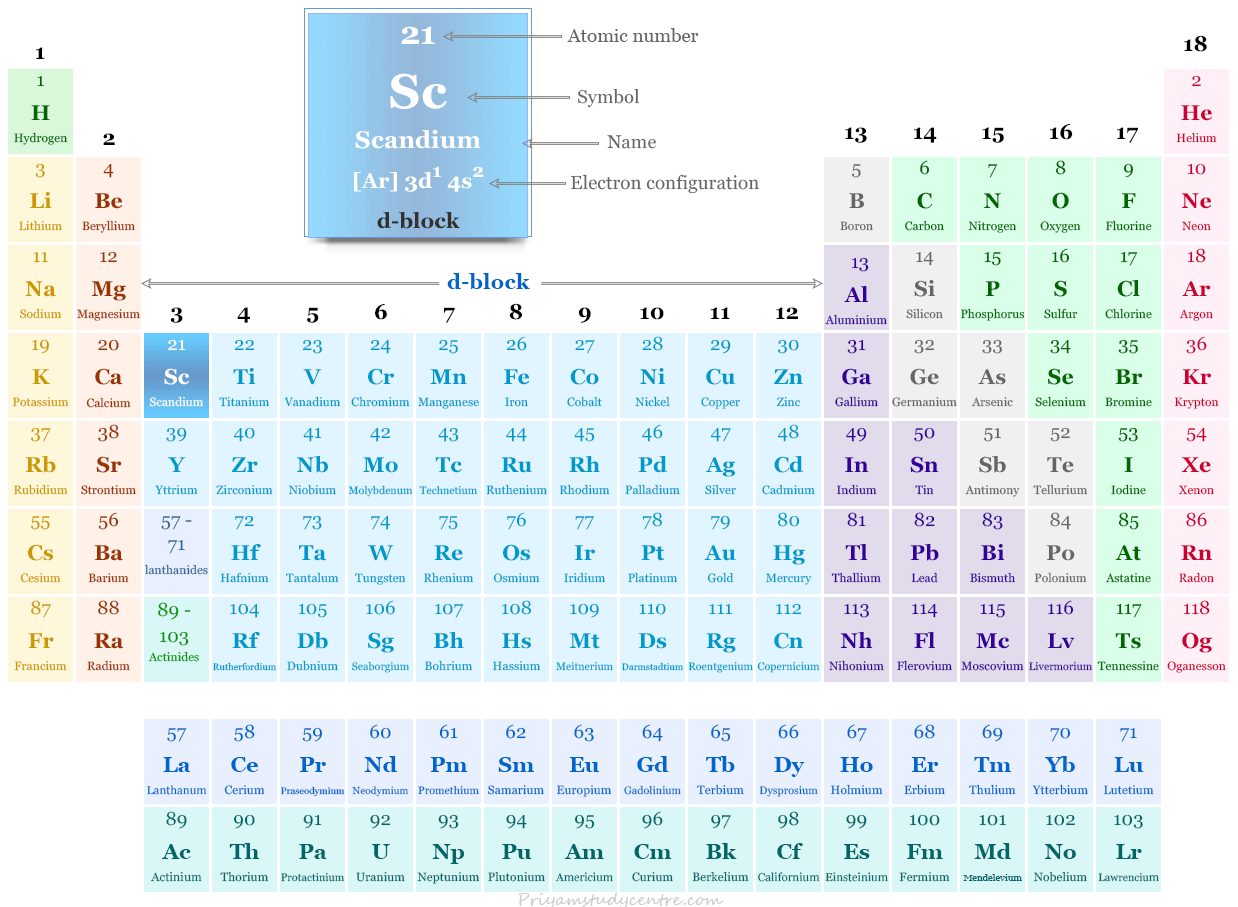 The silvery-white hexagonal crystal lattice, Sc has the valence shell electronic configuration [Ar] 3d1 4s2. The common oxidation number or state of the metal is +3 with no d-electron.

Some physical and chemical properties of scandium are given below the table,

Scandium minerals may be treated similarly to bauxite to obtain insoluble ScO(OH) and dehydration of hydrous oxide to form Sc2O3.

The metal is obtained by the electrolysis of a molten mixture of scandium trichloride (ScCl3), potassium chloride (KCl), and lithium chloride (LiCl).

In nature, 45Sc is the most stable isotope of scandium. It also has thirteen unstable short-lived radioactive isotopes with atomic masses ranging from 36 to 61.

46Sc is the most stable radioactive isotope (half-life of 83.8 days) and 39Sc is the least stable isotope with a half-life of fewer than 300 nanoseconds.

Halogens like fluorine, chlorine, and bromine react with scandium to form ionic halides (ScX3). ScF3 is the only insoluble halide that is dissolved in ammonium fluoride or alkali metal fluoride to give octahedral [ScF6]−3 ions.

The trichloride like ScCl3 is isostructural with AlCl3. The reaction of ScCl3 with excess Sc at high temperature gives lower halides (ScCl) which contain a layer structure.

Sc (III) oxide or scandia is an oxide of metal that has the chemical formula Sc2O3. It is amphoteric in nature. Sc2O3 is dissolved in acids to give Sc (III) salts. In excess sodium hydroxide, it gives Na3[Sc(OH)6]−3.