Vanadium is a chemical element or shining silvery-white, low-density, transition metal of Group 5 (VIB) of the periodic table with symbol V and atomic number 23. It is widely used for alloy making. 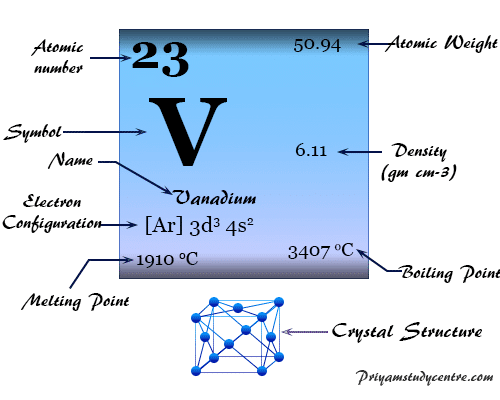 The metal is alloyed with steel and other metals like iron, copper, nickel, and aluminum. These alloys are uses for making springs and high-speed tools.

Pure vanadium metal is soft, malleable, and ductile but impurities make it hard and brittle.

In the white shining cubic crystal lattice, vanadium has the valence shell electron configuration [Ar] 3d3 4s2. The melting point and density of vanadium higher than those of titanium suggest the greater involvement of d-electron in metallic chemical bonding.

It has the highest melting point in the first transition series with a stable +5 oxidation number or state which is not strongly oxidized.

Vanadium in the periodic table

It is placed in group 5 and period 4 of the periodic table. Vanadium is a transition metal that lies between titanium and chromium. 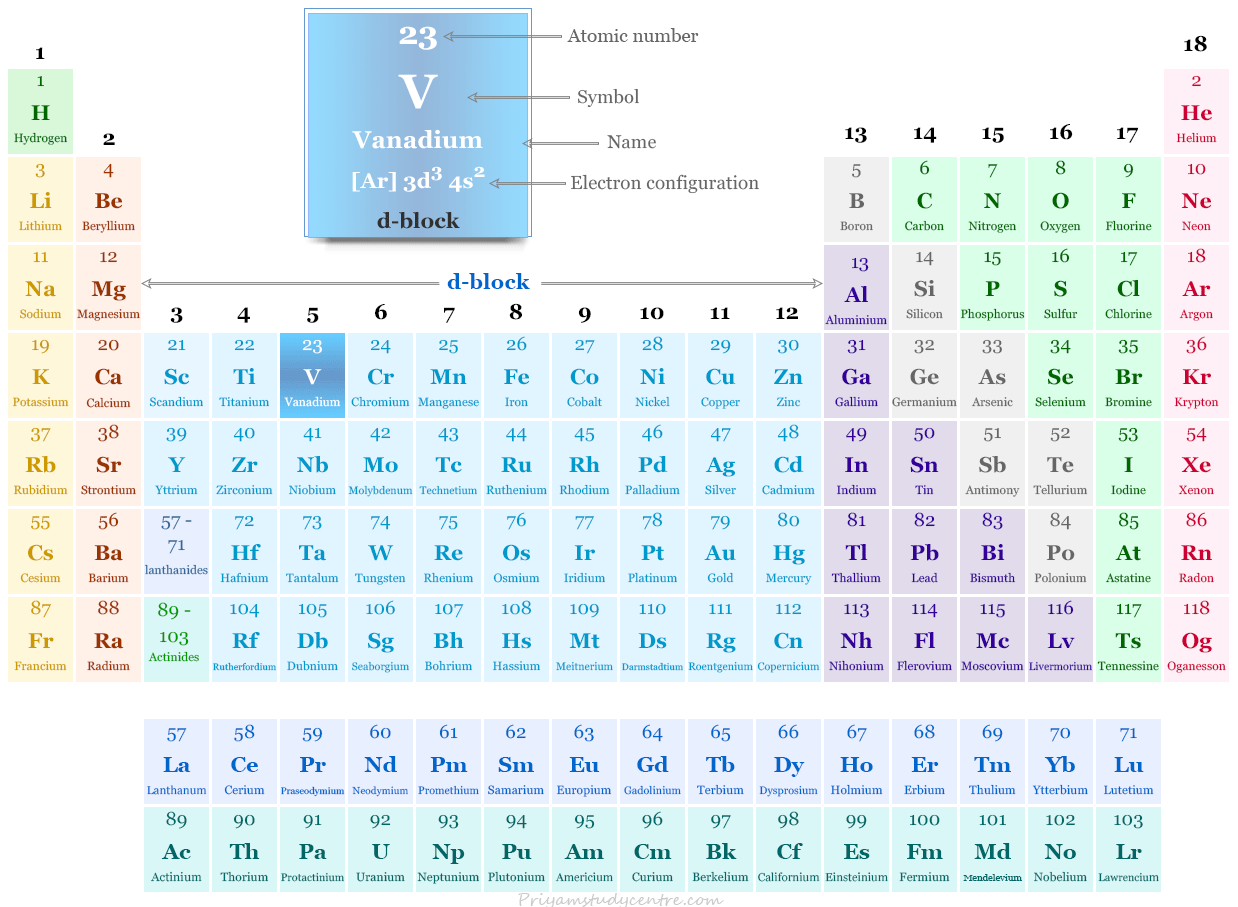 The presence of a new element in some Mexican lead ore was first discovered by Spanish mineralogist Andres Manuel del Rio in 1801. He named it erythronium from the Greek latter erythos meaning red.

In 1830 Swedish chemist Nils Gabriel Sefström found the same element in the Swedish iron ore which produced different types of compounds with a variety of beautiful colors. Therefore, he named the chemical element vanadium according to the Scandinavian Goddess of beauty, Vanadis.

In 1925, the American chemist John Wesley Marden and Malcolm N. Rich prepared the pure form of the metal (99.7 percent) by the reduction of vanadium pentoxide (V2O5) with calcium.

Where is vanadium found?

Vanadium is the fifth most abundant transition metal and the twentieth most abundant element among all periodic table elements. It presents 0.0136 percent of the earth’s crustal rocks.

Some mineral water springs and certain invertebrates and plants have a high concentration of vanadium in their body.

Vanadium is obtained as a by-product in the production of uranium from carnotite.

The metal is purified by conversion to VCl4 followed by reduction with magnesium. A very pure form of vanadium is obtained by pyrolysis of VI3 (van Arkel process).

Most of the commercial-grade vanadium pentoxide (V2O5) is converted to ferrovanadium, an alloy containing 50 percent iron.

Vanadium has a total of five electrons in valence orbitals and shows all the oxidation states +1 to +5, among these +2 and +5 states are stable and important in chemistry.

Aqueous chemistry is characterized by polymeric species commonly known as isopolyvandates. V (IV) is most stable under normal conditions, represented by the halides and vanadyl ion (VO+2).

V (II) is a milder reducing agent than Ti (III) and stable in an aqueous solution. In the +1 oxidation state, it is strongly reducing in nature and rapidly oxidized in air and water.

Vanadium pentoxide (V2O5) is a commercially important chemical catalyst used for the production of sulfuric acid and electrodes in redox batteries.

The lower oxides are obtained by heating metal with excess oxygen. Pure vanadium oxide is an orange crystalline solid (melting point 670 °C) but the technical variety is brown.

In learning chemistry, the halide of vanadium contains the chemical formula VXn (where X = halides), but VI4, VCl5, VBr5, and VI5 are extremely unstable or do not exist.

VF5 is the only pentahalide in the +5 state prepared by heating the metal with fluorine at 300 °C or disproportionation of VF4. It is a violent oxidizing and fluorinating agent.

Three tetrahalides of vanadium in the +4 state are prepared by direct reaction of metal with fluorine, chlorine, or bromine. They act as a Lewis acids adduct by bases like SeF4, NH3, and pyridine.

In +2 and +3 states all the di or tetra halides are stable at room temperature.

It forms any oxohalides having the chemical formula VOmXn. The oxy trifluoride may be prepared by reacting VF5 with air.

VOCl3 and VOBr3 are the most common and important oxides of metal obtained by the action of Cl2 or Br2 on V2O5 or a mixture of V2O5 and carbon.

When VCl3, 3THF is treated with a large excess of lithium phenyl in ether, the purple complex Li4[]VPh6, 3.5 Et2O is obtained.

What is vanadium used for?