Titanium is a chemical element or light silvery metal of Group 4 (IVB) in the periodic table with the symbol Ti and atomic number 22. It has a high melting point, good tensile strength, and properties of thermal and electrical conductance. It forms a hexagonal close-packed crystal lattice like most of the other transition metals. 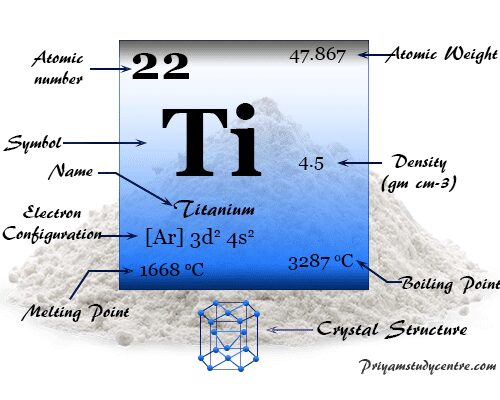 Ti is a very useful metal that uses widely in industry. Titanium alloy is mostly used in high-speed aircraft. The valence shell electronic configuration of metal is 3d2 4s2. Therefore, the highest and most stable oxidation number or state of titanium is +4.

In 1791, the English chemist and mineralogist William Gregor attempted to discover a new metal from titaniferous iron ore, ilmenite (FeTiO3). But he actually isolated an impure oxide.

In 1794, German chemist Martin Heinrich Klaproth prepared the same oxide from mineral rutile. The name of the element, titanium comes from the Greek word Titans.

Titanium in the periodic table

The transition metal Ti is placed in group 4 and period 4 of the periodic table. It is a d-block element that lies between scandium and vanadium. 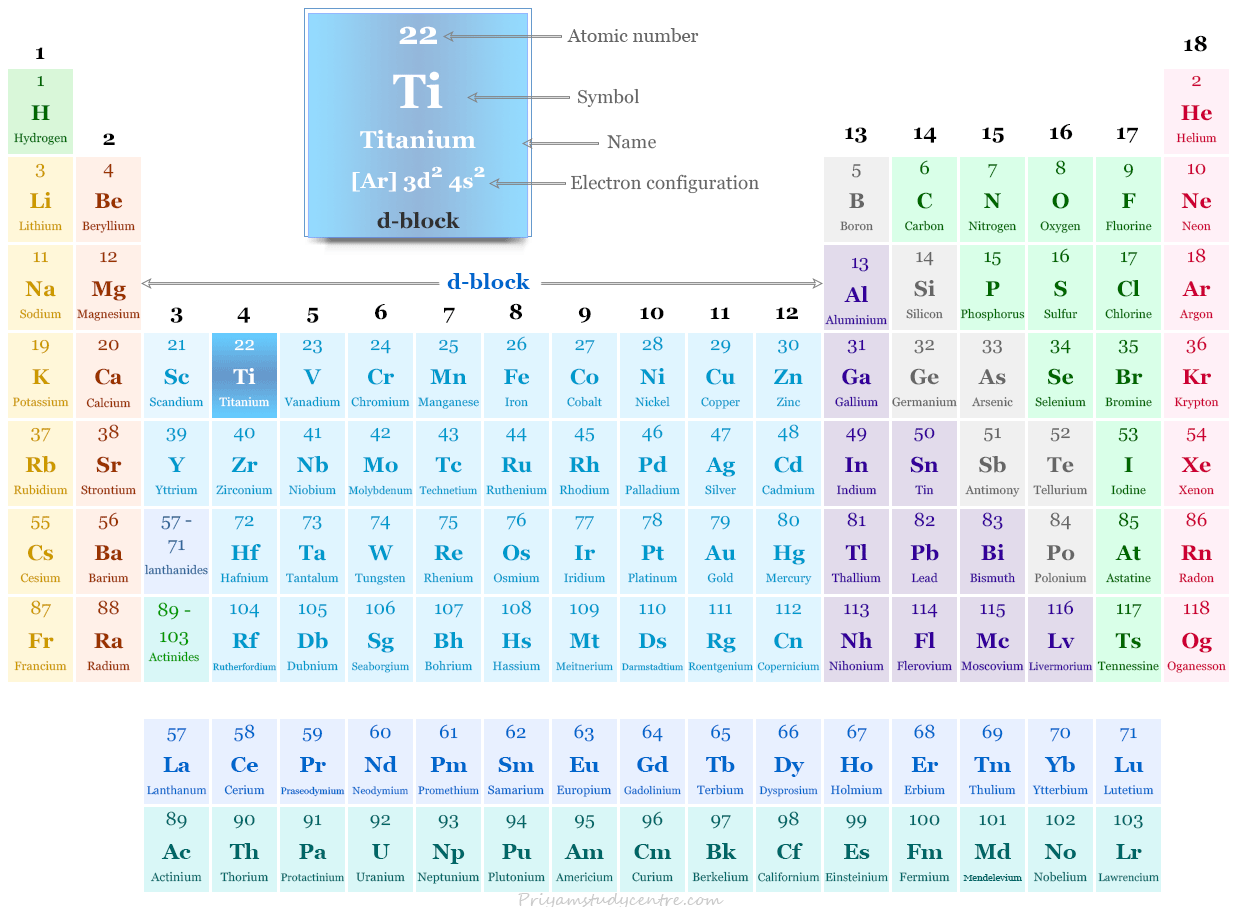 Where is titanium found?

Titanium is the ninth most abundant among all elements and second, among the transition metals. It constitutes nearly 0.63 percent of the earth’s crust. The combined form of metal is found in most igneous rocks, sand, clay, and soils, in living organisms (plant and animal), and in natural bodies of water.

The metal was isolated by metallurgist Berzelius in 1825 and the pure form by M. Hunter in 1910 by reducing titanium chloride (TiCl4) with an airtight steel cylinder.

The preparation of pure titanium is very difficult due to its reactivity at high temperatures. The extraction of metal by carbon reduction produces causes a number of difficulties. It is highly reactive at high temperatures and readily forms carbide, nitride, and oxide by the reaction with carbon, oxygen, and nitrogen respectively.

In learning chemistry, the valence shell electron configuration of titanium is 3d2 4s2. Therefore, the highest and most stable oxidation state of Ti is +4. The compounds of a lower oxidation state (0, II, III) readily oxidized to form Ti (IV).

The high ionization energy is required to form the Ti+4 ion. It suggests that the chemical compounds of titanium in the +4 state are formed by covalent bonding.

Titanium oxide (TiO2) has three crystalline solid forms, rutile, anatase, and brookite. Rutile is the most common naturally occurring form which uses in chemical industries as a pigment. In all the structures, Ti is coordinated to six oxygen atoms.

Ti2O3, violet color oxide of Ti (III) has a structural type similar to that of α-Al2O3.

TiO may be made by heating TiO2 with metallic titanium. It is from a cubic crystalline structure like sodium chloride but usually non-stoichiometric with one-sixth vacant sites for both ions. It is used as a metallic conductor.

The disulfide (TiS2) is the most important sulfide compound of titanium formed with sulfur atoms. It consists of a layer structure. It is used as an electrode for the development of lithium batteries.

All four halides like TiF4, TiCl4, TiBr4, and TiI4 are known. TiF4 may be obtained by reacting the metals with fluorine at 200 °C. Other tetra-halides may be prepared by heating TiO2 with carbon and halogen.

In the +3 oxidation state, it also forms all four halide molecules. They are insoluble in water and stable in air. They are disproportionate to form Ti (IV) halides.