Strontium is a chemical element or alkaline earth metal found in group 2 of the periodic table with the symbol Sr and atomic number 38. It is a silvery white, lustrous, soft metallic element. However, strontium is much harder than alkali metals due to the presence of two valence electrons for metallic bonding. 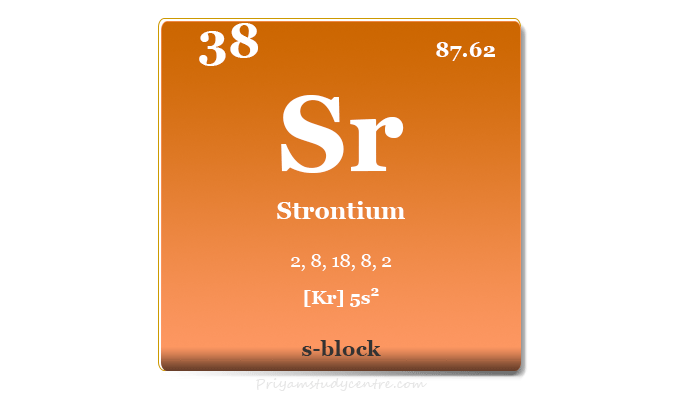 It is chemically similar to that magnesium, calcium, and barium. It is more reactive than magnesium and calcium due to the larger size of the Sr atom. Like other alkaline earth metals, strontium also shows a +2 oxidation number or state.

Where is strontium found?

Strontium is the 15th most abundant element on Earth found mainly in the minerals celestite (SrSO4) and strontianite (SrCO3). Due to high chemical reactivity, it only exists in nature when combined to form minerals. Like calcium, a very small concentration of Sr is found in groundwater and seawater.

Most of the strontium found in the human body is concentrated in our bones. The supplement SrCl2 is used in medicine for the treatment of tooth sensitivity, osteoporosis, osteoarthritis, and prostate cancer.

China is now the leading world producer of strontium but it may also be found in Spain, Mexico, Argentina, Morocco, and United States.

It has four stable natural isotopes like 84Sr, 86Sr, 87Sr, and 88Sr. The abundance of these isotopes increases with increasing mass numbers. Beta decay of 87Rb gives pure 87Sr in some minerals. It is the basis of Rb-Sr dating.

89Sr and 90Sr are the two important isotopes of metal. In radiopharmaceuticals, 89Sr is used for the treatment of bone cancer.

90Sr is a highly radioactive isotope of strontium. Due to high-energy radiation, strontium-90 may be used to generate electric current for space vehicles, remote weather stations, and navigation buoys.

Strontium is a soft, silver-white, and highly chemically reactive metal that forms a dark oxide layer when it is exposed to air. It is harder than alkali metals due to the presence of two valence electrons for metallic bonding.

The physical and chemical properties of Sr are similar to that of vertical neighbor’s calcium and barium in the periodic table.

The crystal structure of strontium is similar to that of calcium. Both metals adopt face-centered cubic crystal lattices.

Strontium in the periodic table

It is found in group 2 and the period 5 of the periodic table. Strontium is an alkaline earth metal that lies between calcium and barium. 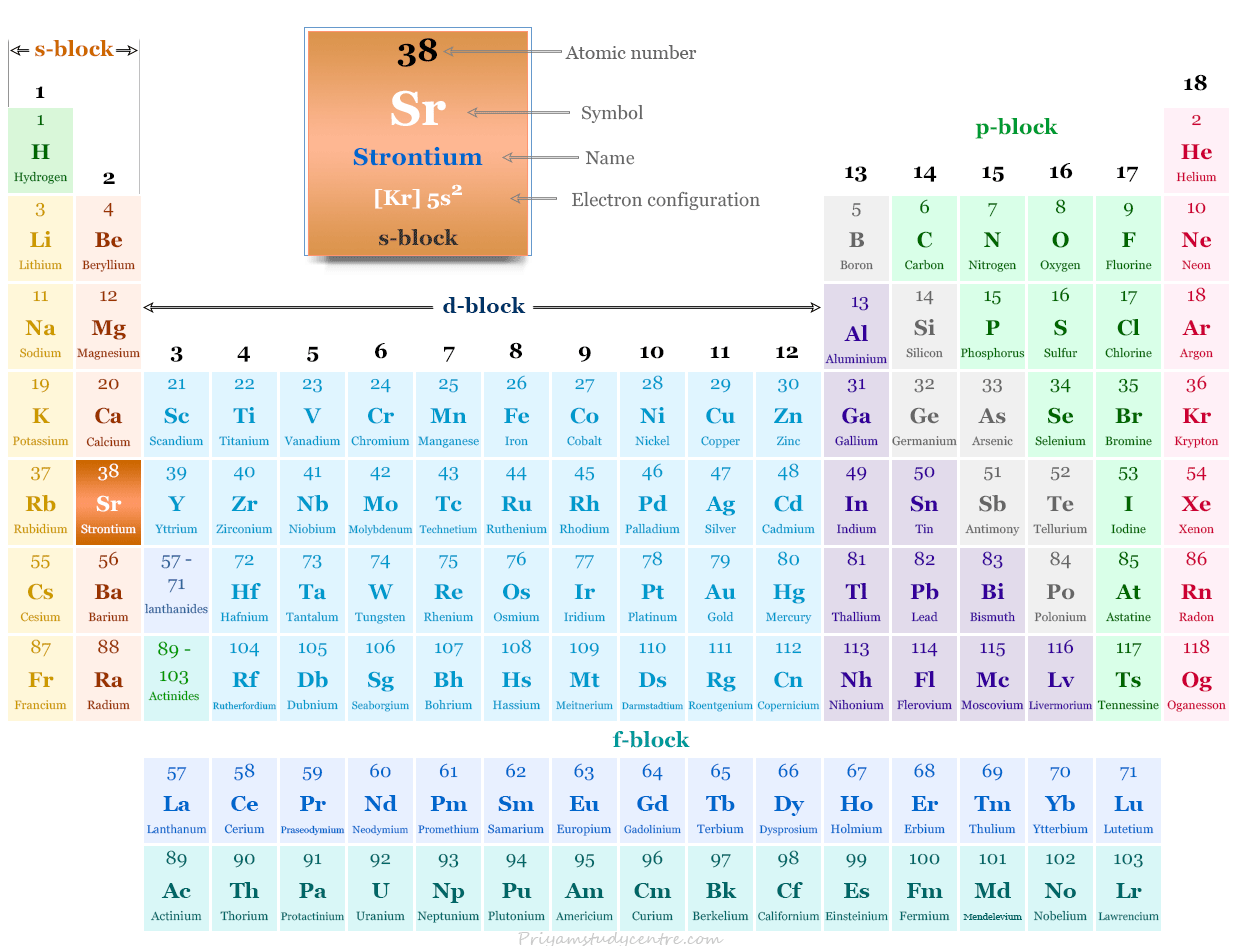 Strontium is extracted mainly from the mineral celestine. The mined celestine (SrSO4) is converted to carbonate by two processes.

A small scale of Sr metal can also be prepared by electrolysis of a solution of strontium chloride in molten potassium chloride.
Sr2+ + 2 e → Sr
2 Cl− → Cl2 + 2 e

The electron configuration of Sr is [Kr] 5s2. Therefore, Sr is characterized by two valence electrons in the 5s orbital outside the noble gas core. These two electrons are uniformly involved together to show uniform bivalency in strontium compounds.

The high value of third ionization energy or closed shell configuration of Sr+2 ion also explains the upper limit of +2 oxidation number or state. The most common compounds of Sr are given below,

Strontium oxide or strontia is a strongly basic oxide with the chemical formula of SrO. Burning Sr metal in the air produces a mixture of oxides and nitride.

Strontia is formed when strontium reacts with oxygen. It is also obtained from the decomposition of SrCO3. It is used mainly for making glass in colour television cathode-ray tubes.

Strontium hydroxide is a caustic alkali with the chemical formula Sr(OH)2. It exists in anhydrous, monohydrate, or octahydrate form.

It is obtained by combining a strontium salt with a strong base. Sr(OH)2 is used chiefly for refining beet sugar and stabilizing plastics.

It is a salt of strontium and chlorine with the chemical formula SrCl2. It can be prepared by treating aqueous Sr(OH)2 or SrCO3 with hydrochloric acid.
Sr(OH)2 + 2 HCl → SrCl2 + 2 H2O

It is a starting material for the production of other strontium compounds such as SrCrO4, SrCO3, SrSO4, etc. It is also used in toothpaste for sensitive teeth, in biological research, and for storing ammonia solution.

It is a carbonate salt of strontium with the chemical formula SrCO3. A white or grey powder of carbonate is found in nature as the mineral strontianite. It is used commonly as an inexpensive colorant in fireworks.

It is a compound of strontium with the chemical formula Sr(C2H4O2)2. Like other acetates, it is a white solid that is soluble in water. It may be obtained by reaction of Sr(OH)2 or SrCO3 with acetic acid.

The use of alkaline earth metal strontium is similar to that of calcium and barium but it is rarely used due to its high price. The most common uses may include,

Strontium in the human body

It is an important trace element in the human body that is found mainly in bone and related tissues. It has a significant role in bone metabolism.

In our body, Sr behaves like calcium. In adults, it mostly attaches to the surfaces of bones. The children whose bones are still growing, strontium may be used to increase the hardness of bone.

What is aluminum metal? Aluminum (symbol Al) or alumium is a chemical element or silvery-white, lustrous, low melting, soft metal of Group 13 (IIIA) or...