Tin is a chemical element or group-14 metal of the periodic table with the symbol Sn and atomic number 50. It is an important metal used in the early days of human civilization. Tin is used mainly for making non-toxic corrosion-resistant coating in steel, particularly for the packaging of food. 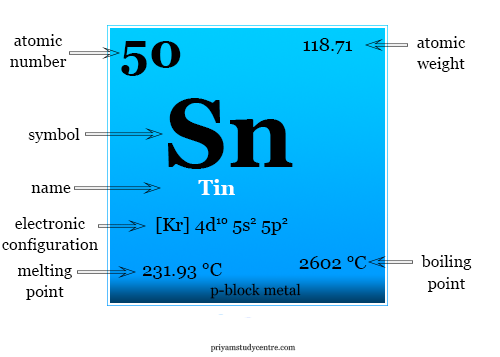 The +2 oxidation number or state is common for tin and lead due to the inert pair effect. Tin has two crystalline solid allotropic forms.

Where is tin found?

Tin is slightly more abundant than germanium but it contains specific ores like cassiterite or tinstone (SnO2). Small quantities of Sn are found in sulfides like stannite, cylindrite, franckeite, canfieldite, and teallite.

Tin scrap is also an important secondary source of metal. Recovery or recycling of scrap tin is increasing rapidly due to the huge global demand.

Malaysia, Russia, Bolivia, Indonesia, Peru Thailand, Brazil, and China are the major producer of the element Sn. In India, tinstone is found mostly in Bihar and Orissa.

The isotope 119Sn (nuclear spin 1/2) is used for NMR studies and Mossbauer spectroscopy.

The mineral cassiterite or tinstone contains only 1 to 5 percent of SnO2, together with silica and wolframite. The major steps for extraction of metal are,

The +2 state is the common and stable oxidation state of tin and lead but for other elements +4 state is common.

Tin in the periodic table

Tin is found in period 5 and group 14 or the carbon group of the periodic table. 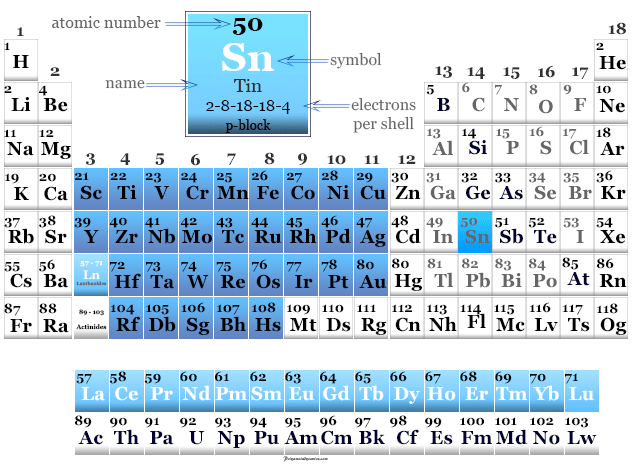 It is a p-block element that lies in between germanium and lead in the periodic table.

All the elements of group-14 form gaseous hydrides like MH4. The stability of the group-14 hydrides decreases sharply from Ge to Pb.

SnH4 decomposes slowly at room temperature and is passive towards dilute aqueous acids and alkalis. But it is also decomposed by concentrated acids or alkalis.

SnH4 is a good reducing agent in organic chemistry. It is used for the transformation of benzaldehyde to benzyl alcohol or nitrobenzene to aniline.

All four tetrahalides of tin are known. Except for SnF4, all these halides are formed by covalent bonding with volatile in nature.

SnF4 is a hygroscopic white solid formed by treating SnCl4 with anhydrous HF.

The other SnX4 compounds are best made by the direct union of metal and halide. SnCl4 and SnBr4 are colorless liquids while SnI4 is a bright orange solid.

As mentioned earlier, the divalent state of Sn is more stable than the tetravalent state. Therefore, Sn forms all the stable dihalides. The dihalide, SnF2 has been used in toothpaste but presently it is replaced by NaF due to the toxic nature of Sn.

Tin occurs in nature largely as cassiterite or tinstone (SnO2). It is a white color solid and amphoteric in nature.