Gallium is a p-block chemical element or soft, silvery metal of group-13 of the periodic table with atomic number 31 and symbol Ga. The use of gallium has sharply increased in recent years due to the development of semiconductor technology. It is found mostly in sulfide minerals containing zinc. 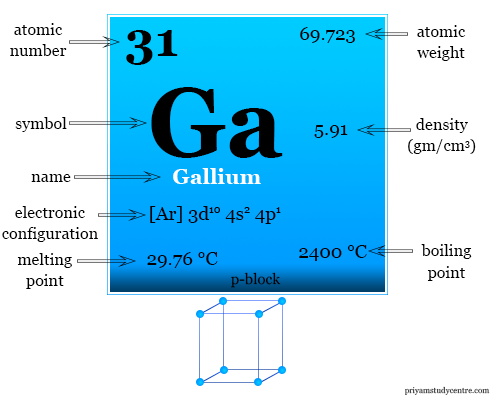 Among group-13 elements, the extremely high melting point of boron indicates that it has a very strong binding force. Aluminum is comparatively soft. Gallium is liquid over a wide range of temperatures and is used in high-temperature thermochemistry.

In 1870, Mendeleev made wonderful predictions about gallium and he named it eka-aluminum.

In 1875, France chemist Paul-Émile Lecoq de Boisbaudran discovered or isolated the element from crude zinc blende. The name gallium was given in honor of France (Latin name Gallia).

Gallium in the periodic table

The element is placed in period-4 and group-13 in the periodic table. It is a p-block element that lies between aluminum and indium. 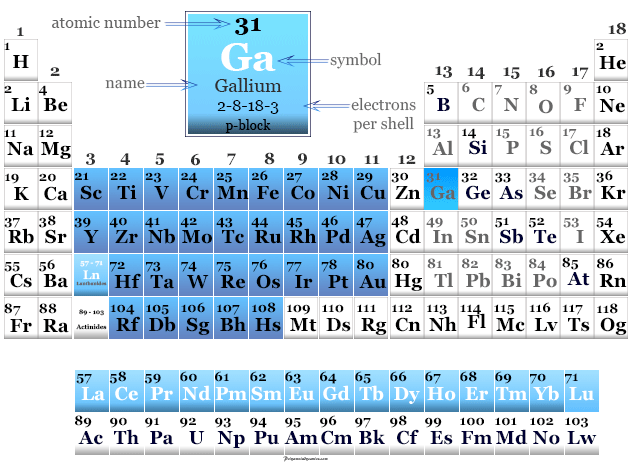 It is low melting, soft, silvery lustrous metal. The low melting point of Ga has no simple explanation. It might be explained by the filled d10 configuration. But the boiling point of Ga is not lower than Al. Therefore, it has the longest liquid range of any element.

Where is gallium found?

Gallium is found on earth much less abundant than aluminum. It is found associated with aluminum, coal, and sulfide mineral of zinc and germanium.

Previously, it was obtained from the flew dust emitted during the burning of coal or roasting of sulfide ores. Now, it is obtained as a by-product in the aluminum industry.

Previously, it was extracted from ashes of coal or electrolysis of gallium salts.

The middle member Ga of group-13 differs remarkably from the first member of group-13.

It is used as an intermediate for the purification of Ga metal.

Gallium hydride (GaH3) is similar to that of AlH3 but it is thermally less stable. The viscosity of GaH3 is very high which decomposes completely to the free element at room temperature.

Ga (III) chloride is a volatile crystal lattice containing dimeric molecules with the molecular formula GaH3. It is prepared by heating metal in atmospheric chlorine or HCl gas.

GaH3 forms long white needles which fume in moist air due to the formation of HCl through hydrolysis. The dimeric form of GaH3 is formed below 600°C. Ga (III) chloride is an efficient chemical catalyst that AlCl3 for some hydrocarbon synthesis processes.

Ga(III) sulfate is the chemical compound of gallium with the molecular formula Ga2(SO4)3, or Ga2(SO4)3, xH2O. The crystalline form like Ga2(SO4)3, 18H2O is obtained by dissolving gallium metal in a dilute sulfuric acid solution.