Barium is a chemical element or alkaline earth metal found in group 2 of the periodic table with the symbol Ba and atomic number 56. It is a soft, silvery metal that is never found in nature as a free element. The softness of Ba is lower than that of alkali metals due to the presence of two valence electrons for metallic bonding. 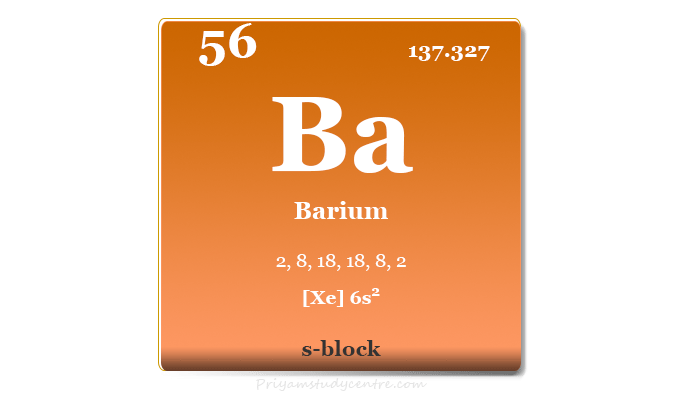 It is chemically similar to that magnesium, calcium, and strontium. It is more reactive than magnesium and calcium due to the larger size of the Ba atom. Like other alkaline earth metals, barium also shows a +2 oxidation state or number.

It was identified in 1774 but not obtained until 1808. In 1808, Sir Humphry Davy first isolated Ba by electrolysis of molten barium salt. The name of the element is derived from the Greek word barys means heavy.

Where is barium found?

Barium is found mostly in the minerals barytes or heavy spar (BaSO4) and witherite (BaCO3). The primary commercial source, baryte or barium sulfate is deposited in many parts of the world. Another commercially less important source is witherite or barium carbonate.

The main deposits and produced counties are located in Britain, Romania, China, India, Morocco, US, Turkey, Iran, and Kazakhstan.

A small amount of barium is also found in seawater as Ba+2 ions and BaSO4, or barite. The constant concentration of Ba is seen in the upper ocean seawater except in the region where the river goes to the ocean.

Robert Bunsen and Augustus Matthiessen can produce pure Ba metal by electrolysis of a molten mixture of barium chloride and ammonium chloride. Commercially, it can be produced by the following process,

BaS is also a starting point for the production of other compounds like barium sulfate and carbonate. When BaS treating with oxygen, it gives sulfate but when treated with carbon dioxide, it gives barium carbonate.

Barium is a soft, silvery-white metal that formed a slight golden shade in an ultrapure state. It is harder than alkali metal due to the presence of two valence electrons for metallic bonding. The melting points of alkaline earth metals are considerably higher than alkali metals due to the same reason.

The silvery-white color of barium metal rapidly vanishes in the air due to the formation of a dark gray layer containing the BaO. Like radium, it also adopts a body-centered cubic crystal structure.

All alkaline earth metals are characterized by two valence electrons in an s-shell outside the noble gas core. These two electrons are always involved together to give uniform bivalency to these elements.

The closed shell configuration of Ba+2 ion explains the upper limit of the +2 oxidation number or state of barium. At room temperature, it reacts with oxygen or air. Therefore, it may be stored in an oil or inert atmosphere.

Barium in the periodic table

Barium is found in group 2 and period 6 of the periodic table. It is an alkaline earth metal or s-block element that lies between strontium and radium. 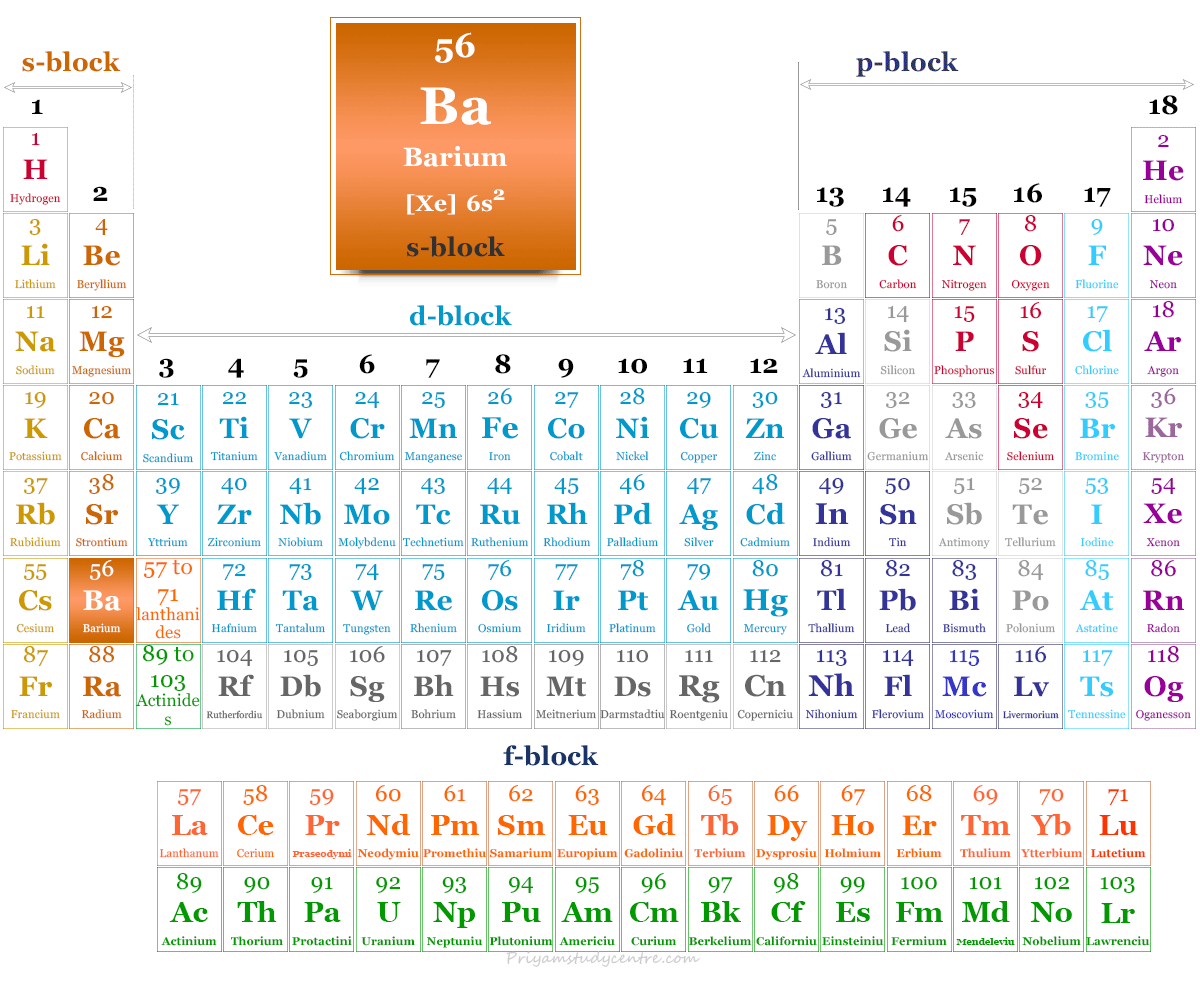 The valence shell electronic configuration of Ba is [Xe] 6s2. The element is characterized by two valence electrons in 6s-orbital outside the noble gas core. These two electrons are always involved together to show uniform bivalency in barium compounds.

The most common chemical compounds of barium are given below,

Barium oxide or baria is a white hygroscopic non-flammable chemical compound with the formula of BaO. It is produced by heating barium carbonate with coke or by thermal decomposition of barium nitrate. BaO is used mainly in cathode ray tubes, crown glass, and catalysts.

It is toxic to human skin and causes irritation. The common side effects of barium oxide are nausea, diarrhea, muscle paralysis, and cardiac arrhythmia. It may also cause death.

Barium hydroxide with the chemical formula Ba (OH)2 can be obtained by treating BaO with water or by adding Ba to an aqueous solution.
BaO + H2O → Ba(OH)2

It absorbs very little carbon dioxide from aqueous solutions. This property is used for calibration of pH meter.

The mass is extracted with water, concentrated, and crystallized. Some calcium sulfide may be retained in the solution. It may be precipitated by the addition of little lime.

Barium sulfate is a white crystalline solid that has the chemical formula BaSO4. It is insoluble in water and obtained commercially from the mineral barite. Due to the insolubility of BaSO4, it is non-toxic for human beings.

It is used widely in paints, inks, leather, paper, linoleum, and face powder. Lithopone does not blacken in atmospheric hydrogen sulfide. But it is slightly dark in light due to the liberation of metallic zinc.

The alkaline earth metal, barium has few industrial applications. The common uses of barium are,

Toxicological data on barium metal can be found due to its high reactivity. The data is only available for Ba compounds. BaSO4 is non-toxic in nature but soluble chemical compounds are poisonous.

Due to high reactivity, it is always stored in an argon atmosphere or under mineral oils. In air or oxygen, it may cause ignition. We always handed barium or its compounds with non-sparking shoes, flame-resistant rubber clothes, rubber gloves, an apron, goggles, and a gas mask.