Lanthanum is the f block element or rare-earth metal of the periodic table with atomic number 57 and symbol La. The valence shell electronic configuration of La is [Xe] 5d1 6s2 4f0. The name rare earth was given because they were originally extracted from rare earth oxide. 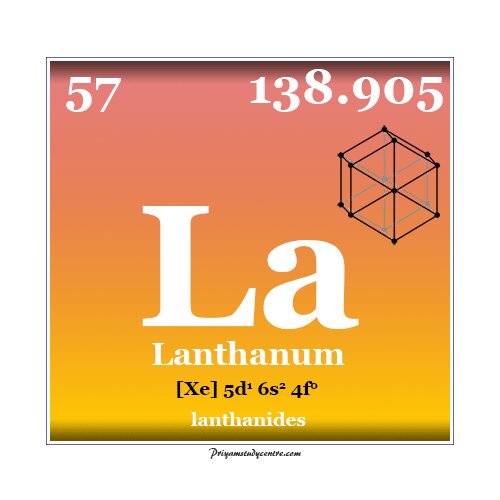 It was first discovered by the Swedish chemist Carl Gustaf Mosander in 1839 and the name lanthanum was given from the Ancient Greek latter lanthanein which means to lie hidden. It is the first f block element and prototype of the lanthanide family.

It is a soft, silvery-white rare earth metal that rapidly tarnishes in the air and burns easily when heated. Lanthanum is part of the scandium group or group 3 (IIIA) due to the presence of (n − 1) d1 ns2 electronic configuration.

Due to the lack of common features of d-block elements, it shows a single stable oxidation number or state like +3, and closely resembles lanthanides.

Lanthanum in the periodic table

Lanthanum is a rare earth element placed within the f-block element in the periodic table. 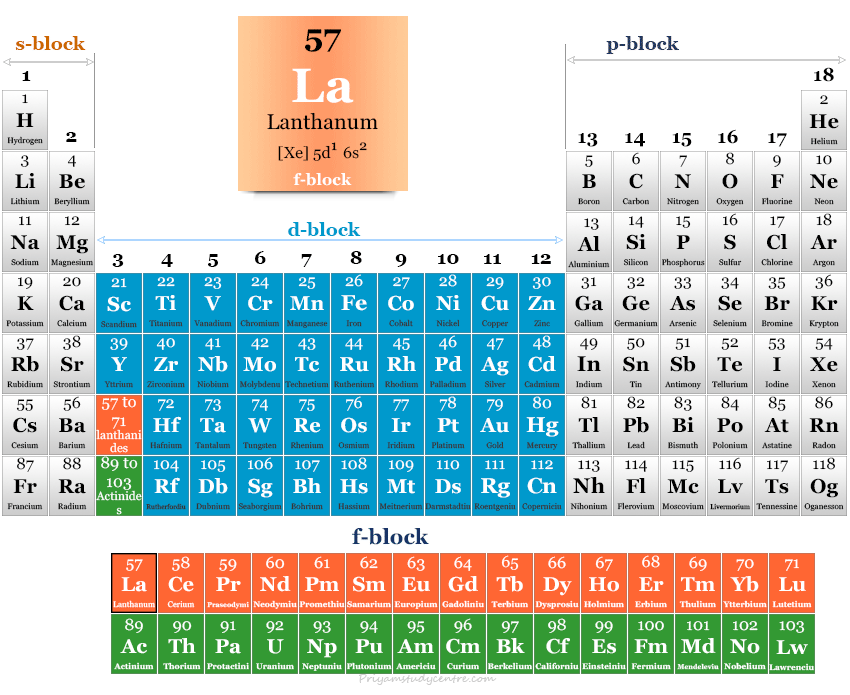 Where is lanthanum found?

Lanthanum is the third-most abundant of all the lanthanides. There are 200 minerals known which contain rare earth metals.

The two most commercially important minerals are monazite and bastnaesite. Monazite is a mixed phosphate of lanthanum, cerium, thorium, and other rare-earth. Bastnaesite is a fluoride carbonate of lanthanum and other rare earth metals, but the heavier elements are virtually absent from it.

Naturally, occurring lanthanum contains two isotopes like 139La and 138La. 139La is most abundant but 138La is rare.

Monazite is chemically quite inert and has a high density. It is mostly concentrated in beach sands and river beds through weathering.

It is found in southern India, South Africa, Brazil, Australia, and Malaysia. Commonly, we used monazite for the extraction of lanthanum and other rare earth metals.

The main steps involve in the production of lanthanum and other rare earth are as follows:

However, the most modern methods for the extraction of lanthanides are solvent extraction and ion exchange chromatography techniques.

Lanthanum is silvery-white, soft, and malleable with high electrical conductance. It is highly electropositive and reactive. The reactivity of higher members of lanthanides is comparable to calcium and scandium to aluminum.

The compact metal is quite stable to dry air at ordinary temperatures. It burns in the air to form oxide (La2O3) and nitride (LaN).

On heating, lanthanum reacts with a number of nonmetals like nitrogen, sulfur, silicon, phosphorus, hydrogen, etc. It forms salt-like hydride (LaH3 and LaH2) which contains H− ion in the compound.

Radon element Radon is a chemical element or noble gas or Group 18 element of the periodic table with symbol Rn and atomic number 86. It...