Xenon is a chemical element or inert or noble gas of Group 18 of the periodic table with the symbol Xe and atomic number 54. It is found in trace amounts in the earth’s environment. Due to filled valence orbital and high ionization energy, the oxidation number or state is zero but with fluorine, xenon shows a higher oxidation state also. 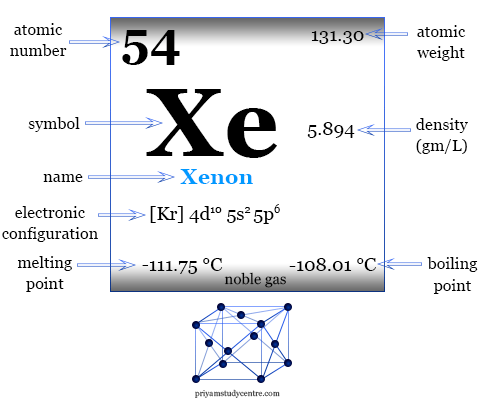 Xenon is used in flash or arc lamps, and as an anesthetic in medicine. It is a colorless, dense, odorless, tasteless, monoatomic gas that forms true chemical compounds with fluorine.

Xenon in the periodic table

Xenon is placed in group 18 and period 5 in the periodic table. It is a noble gas that lies between krypton and radon. 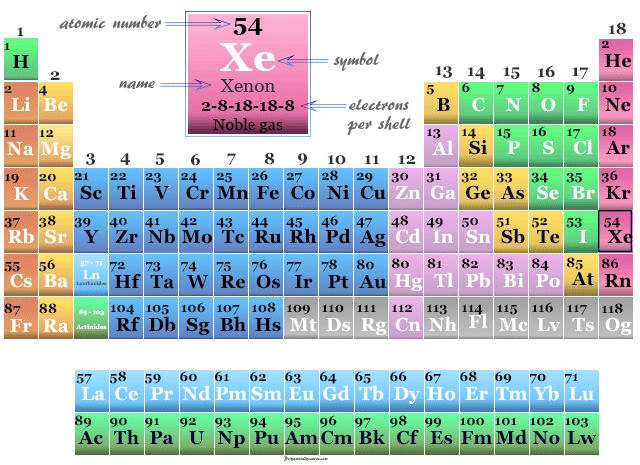 A heavy and extremely rare gas, xenon was discovered by the British chemists Sir William Ramsay and Morris W. Travers. The name of the gas was derived from the Greek latter Xenos meaning strange or foreign.

Where is xenon found?

The gas is widely used in light-emitting devices like flash lamps, photographic flashes, high-pressure arc lamps, and shorter-lived carbon arc lamps. It is also used as a starter gas in high-pressure sodium lamps.

In solid-state, xenon forms a face-centered cubic crystal lattice, and the cubic close-packed structure is the most space-economizing.

Natural xenon is a mixture of nine stable isotopes. The atomic mass and natural abundance of these xenon isotopes are given below the table,

Different types of artificial radioactive isotopes are obtained by the nuclear fission reaction whose life is very small.

Xe-135 is produced in the reactor of the nuclear power plant by nuclear transmutation of uranium. Xe-135 has a huge cross-section for thermal neutrons since it can be considered as a neutron absorber in a nuclear reaction or chain reaction.

A huge number of radioactive isotopes of xenon are also released from the nuclear reactor during the nuclear fission reaction.

Xenon is rare in the earth’s atmosphere and more expensive than other noble gases like helium, neon, argon, and krypton.

The chemistry of xenon and other noble gases like He, Ne, Kr and Rn has different from other periodic table elements due to their stable valence shell electron configuration. They cannot participate in covalent bonding due to very high electron promotional energy.

The formation of chemical bonding to form an ionic compound like Xe+F− is similarly difficult due to very high ionization energy.  Xe2+ ion is stable in a vacuum with a bond order of 0.5 and usually high bond energy.

Prior to 1962, no true chemical compound of xenon is known. Clathrates or cage compounds formed with para-quinol and water.

As early as 1933, Linus Pauling attempted to make the chemical compound XeF6 but failed until 1962. In 1962, British chemist Neil Bartlett produced the first yellow-orange solid xenon compound that contains a mixture of [XeF+][PtF6−], [XeF+][Pt2F11−].

He observed that PtF6 changes color on exposure to air. It was subsequently established that PtF6 is a very strong oxidizing agent capable of oxidizing oxygen and xenon. This was the beginning of noble gas chemistry.

All three xenon fluorides are colorless volatile crystalline solids but in the liquid or gas phase XeF6 shows yellow color. All the fluorides are readily hydrolyzed to form Xe or XeO3. The formation of XeO3 is highly explosive which caused many accidents during the study of XeF4 and XeF6.

All three fluorides are strong oxidizing and fluorinating agents, reactivity increasing from XeF2 to XeF6. Therefore, XeF6 combines with hydrogen and attacks glass at ordinary temperature but others attack by heating.

XeF2 is used as a fluorinating agent in alky or aryl hydrocarbon synthesis and oxidizer of silver (I) to silver (II) and chromium (III) to chromium (IV) and BrO3− to BrO4−.

Other oxofluorides of xenon like XeOF2 and XeOF3 are unstable and formed in a low-temperature matrix by reacting Xe with OF2 or by hydrolysis of XeF4 at low temperature.

XeOF2 disproportionates in presence of CsF to give anion [XeO2F3]−. Stable white salt of [XeO3F]− is formed by reacting aqueous XeO3 with CsF or KF.

The xenon trioxide, XeO3 is the end product of hydrolysis of XeF6. The violence of the reaction is controlled by sweeping XeF6 vapor with dry nitrogen into the water. XeO3 crystals consist of trigonal pyramidal units with xenon atoms at the apex.

The tetraoxide, XeO4 is formed by the action of concentrated sulfuric acid on sodium and barium perxenates. A perxenate of lithium, and potassium is formed by disproportionation of XeO3 and XeF6 in the respective alkaline solution.

The dichloride, XeCl2 is not formed under usual conditions but may be formed when Xe and chlorine mixture passed through a microwave discharge and rapidly cools. XeCl2, XeBr2, and XeCl4 have also been detected by Mossbauer spectroscopy in the beta-particle decay.

A chemical compound (BXeF3) containing a boron xenon bond is formed by the reaction of O2BF4 and xenon at −100 °C. It contains a planner structure in which one fluorine atom in XeF2 is replaced by a BF2 unit.