Beryllium is a chemical element or alkaline-earth metal of Group 2 (IIA) of the periodic table with the symbol Be and atomic number 4. It is used largely in metallurgy to improve the properties of copper and nickel alloys. 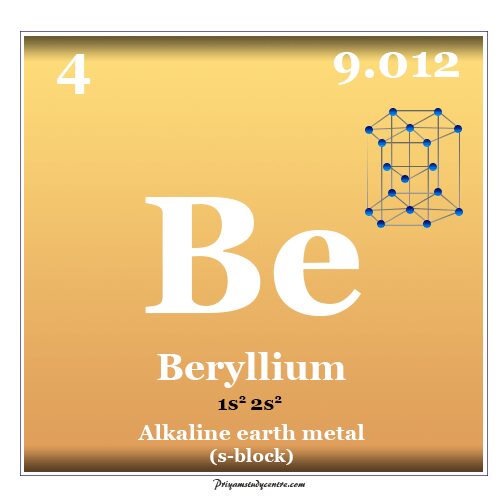 It is the first member of alkaline earth metals with a very small size and very high effecting nuclear charge.

It was discovered from the mineral beryl in 1798 (Vauquelin) but its atomic weight was finalized much later by Mendeleev. It was prepared independently by Wohler and Bussy in 1828 by the reduction of BeCl3 with potassium.

It forms a hexagonal closed-packed crystal lattice (HCP). It shows dipositive oxidation number or state by the liberation or sharing of two valence electrons.

Beryllium in the periodic table

Beryllium is placed in period 2 and group 2 of the periodic table. It is an s-block element that lies with magnesium and calcium. 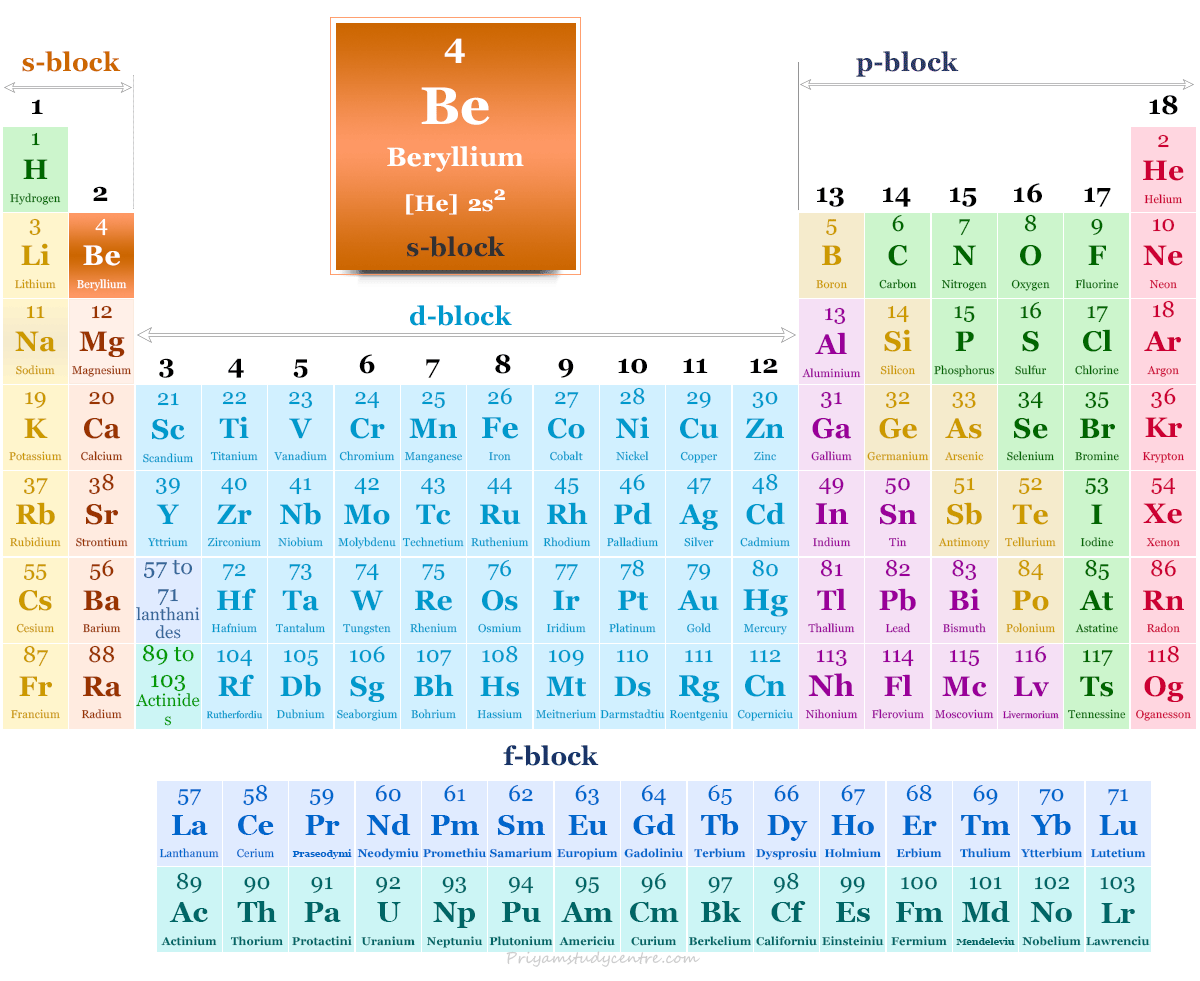 Where is beryllium found?

The concentration of beryllium is very low (2 to 6 ppm) on the earth’s crust. The small abundance of beryllium is due to the transmutation of the Be atom under the natural bombardment of protons.

The element is readily accessible through the minerals like Beryl (Be3Al2Si6O18) and Phenacite (Be2SiO4). It is also found in pegmatite rocks and forms large beautiful crystalline solids that are used as gems like Emerald (green colour) or aquamarine (bluish-green colour).

Beryllium (4Be8) has atomic number 4 and mass number 8. Therefore, Be nucleus contains 4 protons and 4 neutrons surrounded by four electron particles. 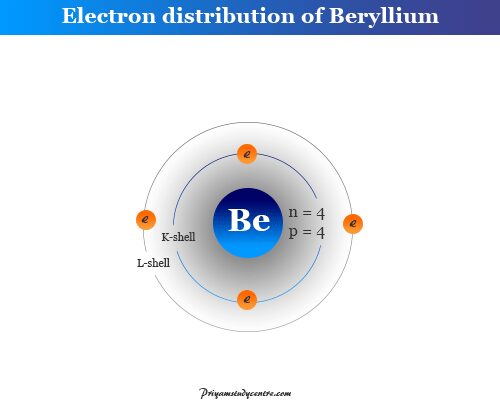 All the elements Group-2 like beryllium, magnesium calcium, strontium, barium, and radium are characterized by two valence electrons in the outermost s-shell. These two electrons are always involved together in the formation of chemical bonding in chemistry.

The melting points of alkaline earth metals are considerably higher than that of alkali metals due to the variation of the crystal structure.

We observed that beryllium is much less reactive than the other elements in the group due to its small size. It dissolves in aqueous mineral acids like hydrochloric acid, sulfuric acid, and nitric acid to liberate hydrogen gas.

The charge by radius ratio for Be+2 is very high, greater than that of any cations except H+ and B+3. The closest value is found with Al+3. This fact suggests that beryllium and aluminum have similar physical and chemical properties.

Hydrides, oxides, and hydroxide of beryllium

It does not form any hydrides directly but BeH2 may be obtained by reducing BeCl2 with lithium hydride with LiAlH4. Beryllium hydride is an amorphous white solid that decomposed above 250 °C giving hydrogen.

It forms its monoxide (BeO) when heated to oxygen. Beryllium oxide is strongly basic in nature and formed by covalent bonding.

The hydroxide like Be(OH)2 can be obtained by treating their monoxide with water or by adding alkali to an aqueous solution of the salts.

Carbides, nitrides, and halides of beryllium

The carbide of Be has the chemical formula Be2C. It is formed by direct reaction with carbon at 1900 °C. It also obtained heating metal with acetylene at around 400 °C.

It burns in nitrogen to form crystalline solid nitrides like Be3N2.

All the metals of group 2 combine with halogen at a suitable temperature to form dihalides like BeCl2 or MgCl2. All the halides of beryllium are covalent and polymeric in nature. They do not conduct electricity in the molten phase of the metal.

The aryl compounds of the metal are made by reacting lithium aryl (in a hydrocarbon) with BeCl2 in ether. These compounds are viscous liquids or solids which are spontaneously flammable in air and rapidly hydrolyzed by a water molecule.

Beryllium is used widely to improve the properties of transition metals like copper and nickel. About two percent of Be increases the strength of Cu six-fold.

The beryllium alloys are non-magnetic, corrosion-resistant, and possess high strength and good electrical conductance. They find extensive applications in critical moving parts of aerospace or electrical industries like high-speed aircraft, guided missiles, spacecraft, satellites, and nozzles of the liquid-fuel rockets

The metal beryllium is also used in nuclear power plants as a moderator and as a window material of electromagnetic spectrum or x-rays tubes.