Germanium is a chemical element or hard, lustrous, grayish white metalloid of group-14 of the periodic table with the symbol Ge and atomic number 32. It is used mainly for making optical parts in the infrared spectrometer. 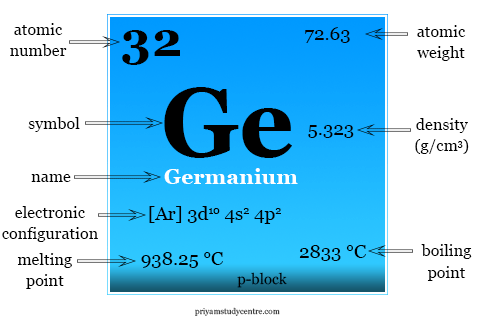 The general trends in chemistry of group-14 or carbon group follow the typical pattern of the boron group. The trend of periodic table properties of group 14 elements is largely understood by their electronic configuration. The effect of shielding electrons of d and f orbitals is predominant for Ge and Pb.

Where is germanium found?

It is not found widely in ores. Germanium is found with zinc and silver minerals. It is mined in Alaska, Tennessee, China, United Kingdom, Ukraine, Russia, and Belgium.

The relative abundance of these isotopes is given below the table,

It has a diamond-type crystal lattice. But the larger size and weak bond energy result in a lower melting point than silicon or carbon.  The electronegativity of Ge is slightly greater than that of silicon or tin.

The chemical reactivity and electrical conductance of group-14 elements increase down in the group.

Elemental germanium burns slowly in the air to form GeO2. It is insoluble in dilute acids or alkalies but dissolves in hot concentrated sulfuric acid or nitric acid.

Germanium is found in period 4 and group 14 or carbon family of periodic table. 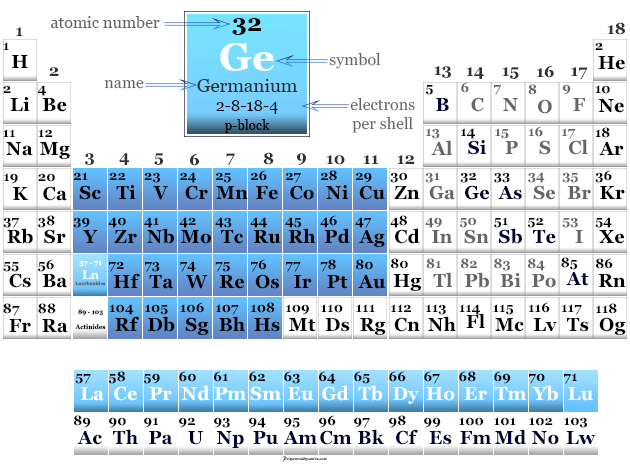 It is a p-block element lies between silicon and tin in the periodic table.

Previously, Ge was recovered from coal ash. Now it is mostly obtained from the flue dust of zinc.

Most of the compounds of group-14 elements are formed in +2 and +4 oxidation states. The high values of ionization energy suggest that the formation of M+4 ions would be rather unlikely except for Sn and Pb.

The compounds of germanium are mostly formed by covalent bonding. Some important chemical compounds of Ge are given below,

The tetrahalides of germanium are readily prepared from the elements or by the action of HX on GeO2. The physical properties of the tetrahalides are given below,

The tetrafluoride is prepared by the reaction of concentrated HF with GeO2. It is a colorless hygroscopic gas with a boiling point of −36.5 °C.

Germanium tetrachloride is made by heating Ge in a stream of chlorine or by heating GeO2 with fuming hydrochloric acid. It is a fuming liquid with a melting point of − 49.5 °C and a boiling point of 86.5 °C.

Germanium oxide is a white solid with the chemical formula GeO2. It is sparingly soluble in water. GeO2 is weakly acidic in nature, forming germinates with alkalies. It is forming GeCl4 with concentrated HCl.

GeO2 may be prepared by strongly heating the metalloid in oxygen or reacting of metalloid with concentrated nitric acid.

Modern developments in semiconductor technology began in the 1950s with the introduction of germanium transistors. The production of pure germanium is easier than that of pure silicon.

Methods to prepare ultrapure silicon were developed in the 1960s. Therefore, silicon transistors are now widely used due to their superior quality. Hence the use of germanium transistors is now declined.

Nitrogen element Nitrogen is a nonmetallic chemical element of group 15 of the periodic table with symbol N and chemical formula N2. It is a...