Cadmium is a chemical element of group 12 metal in the periodic table with the symbol Cd and atomic number 48. It is silvery white soft metal chemically similar to that of group member zinc and mercury. It is used widely in cadmium plating of steel to prevent corrosion and rechargeable batteries made by nickel-cadmium cells. The use of cadmium generally decreases due to its toxic nature. 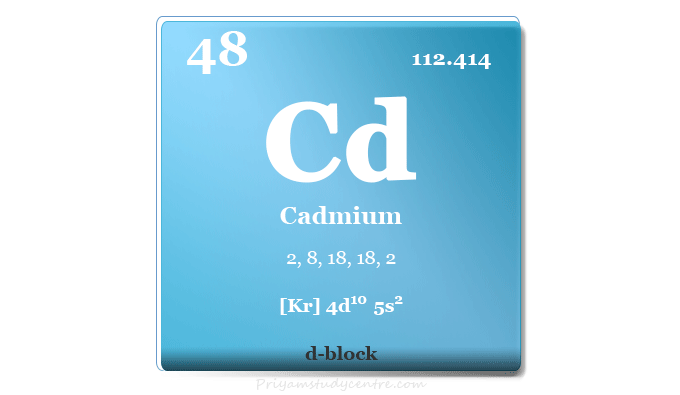 The element Zn, Cd, and Hg are the last members in each d-series but have no characteristics of transition metals. These elements contain filled d-orbital and do not show variable oxidation numbers or states, colour arising out of d-d transition, and paramagnetic complexes.

Cadmium was discovered in 1817 by German chemists Stromeyer and Hermann from an impurity in zinc carbonate. The name of the metal is derived from the Latin word cadmia which is obtained from the mineral name calamine.

Where is cadmium found?

A small quantity of Cd is found in most soil and rocks, coal, and mineral fertilizers. Cadmium minerals are usually combined with other elements such as oxygen, chlorine, or sulfur.

Cadmium invariably occurs as an impurity in zinc and the metal is recovered as a by-product of zinc production.

Cadmium is a lustrous silvery metal with a bluish tinge and tarnishable in moist air. It forms a distorted hexagonal closed-packed metallic crystal lattice with an elongated distance between closed-packed layers.

The density of Cd is slightly lower than those of copper and silver. It is a softer and low-melting metal in comparison to other transition metals.

The 48 electrons of the Cd atom are distributed in different energy levels to show the following electron configuration given below the picture, 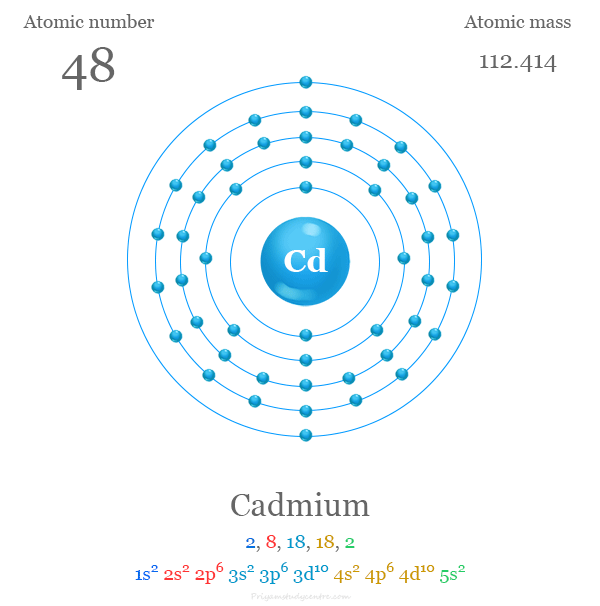 Cadmium in the periodic table

Cadmium is placed in group 12 and period 5 in the periodic table. It is a d-block element that lies between silver and indium. 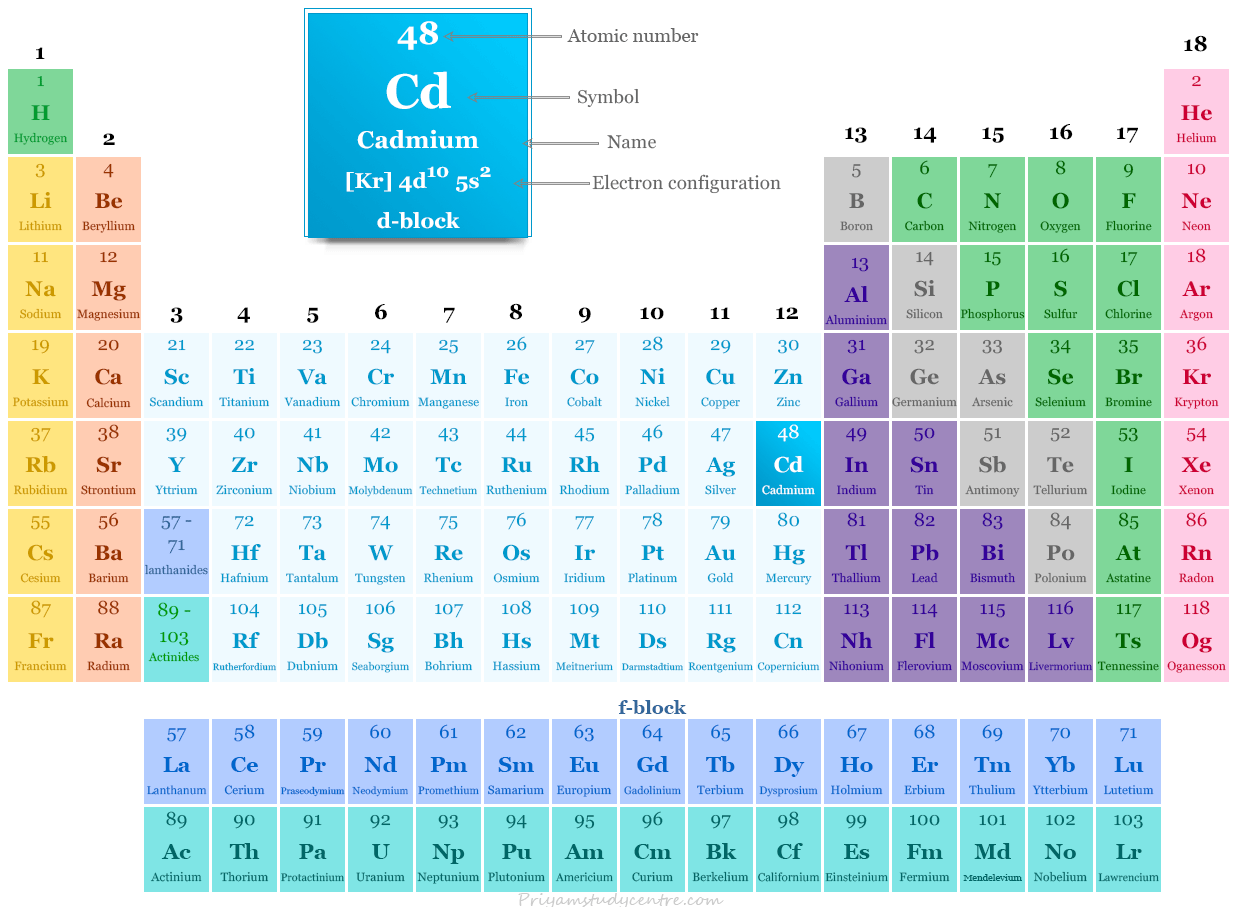 It burns in the air to brown amorphous cadmium oxide (CdO). The dark red crystalline solid CdO is obtained when heating. It adopts a sodium chloride-type crystal lattice. The dark red colour also changes to black when heating due to lattice defects.

Cadmium may dissolve in mineral acids like hydrochloric acid, sulfuric acid, or nitric acid by liberation of hydrogen and formation of CdCl2, (CdSO4), or Cd(NO3)2.

The addition of sodium hydroxide or potassium hydroxide to the Cd+2 solution precipitates white Cd(OH)2. It may be dissolved in concentrated alkali on prolonged boiling to form hydroxocadmiates, K4[Cd(OH)6].

The large difference between the 1st and 2nd ionization energies for Cd suggests the formation of a Cd+ ion. In practice, like the mercury (I) state, the univalent state appears in the form of Cd2+2. It is readily disproportionate in an aqueous solution to form Cd and Cd+2 ions.
Cd2+2 → Cd↓ + Cd+2

The sulfide of Cd is very familiar to us in the routine group analysis of Cd+2. CdS precipitated by hydrogen sulfide from a dilute HCl medium because CdS requires a faintly acid medium for complete precipitation.

The use of cadmium decreased in recent years due to its toxic behavior. It causes birth defects and cancer. It is used mainly to make batteries, alloys, coatings (electroplating), solar cells, plastic stabilizers, and pigments.

Cadmium enters the water through industrial discharges or the deterioration of galvanized pipes. It is toxic to certain fish at concentrations above 200 ppb while the normal level of Cd in portable water is 0.4 to 60 ppb.

It may also concentrate in plants where they enter with zinc. The small amount of cadmium that enters the human body has been eliminated through the kidneys but the residual fraction is bound by body protein. It ultimately leads to kidney disinfection.

Excessive daily dose or inhalation may cause the following disorders in human health,

Cadmium may replace zinc in our body and inhibit the action of zinc enzymes.

What is lutetium? Lutetium is a chemical element or rare earth metal in the periodic table with the symbol Lu and atomic number 71. Due...