Rhodium metal is one of the rarest elements found in group 9 of the periodic table with the symbol Rh and atomic number 45. It is a silvery-white, hard, corrosion-resistant transition metal that is found in platinum or nickel ores. Rhodium is a high price metal that is used for plating gold and silver jewelry to improve their appearance. 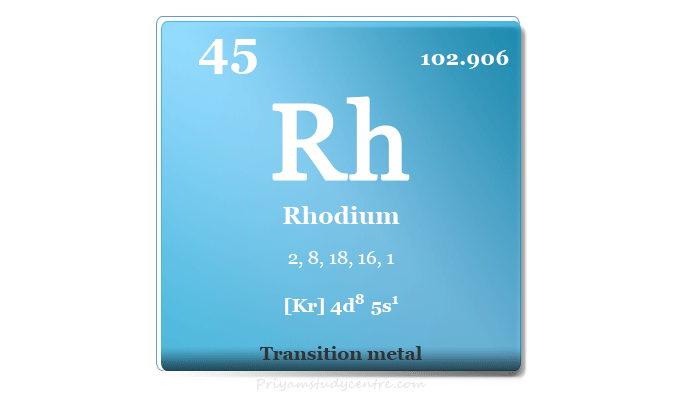 The metal palladium and rhodium were discovered by English physicist and chemist Sir William Hyde Wollaston in the same year (1803). After this discovery, palladium is considered as demanding metal in the world market but rhodium is less well known. At this time it was not used widely due to the rarity of abundance, difficulty in shaping, and high melting point.

But as the years passed, it was used for electroplating and corrosion-resistant coating in jewelry. The catalytic converter was discovered in 1976. After this discovery, the demand and price of rhodium metal increased substantially.

It is used in the catalytic converter of every new car. Therefore, the value of rhodium very much depends on the demand from the automotive industry. The price of the metal can also be affected by the level of supply from the main exporter South Africa followed by Russia.

Where is rhodium found?

Rhodium is one of the rarest metals in the Earth’s crust found in platinum ores and extracted as white inert metal. Rhodium is found with other platinum metals in river sands of the Ural Mountains in Russia, South Africa, North and South America. A very small concentration of metal is found in the copper-nickel sulfide mining area of the Sudbury, Ontario, region.

The estimated abundance of the metal in the earth’s crust is about 0.0002 parts per million. The rarity of abundance affects the commercial applications and price of rhodium. The main exporter of rhodium is South Africa followed by Russia and the annual world production of the metal is about 30 tonnes.

The primary radioactive decay mode of Rh isotopes is electron capture and beta emission. The primary decay product of radioisotopes is ruthenium and palladium.

Rhodium is a silvery-white, hard, and very shiny metal that reflects up to 80 percent of light.

The 45 electrons of the rhodium atom are distributed in different energy levels to show the following electron configuration given below the picture, 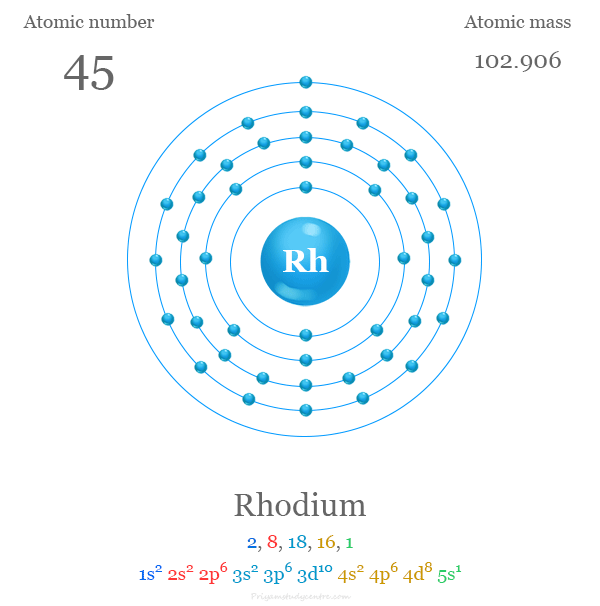 Rhodium in the periodic table

The platinum metal rhodium is placed in group 9 and period 5 in the periodic table. It is a d-block element or transition metal that lies between ruthenium and palladium. 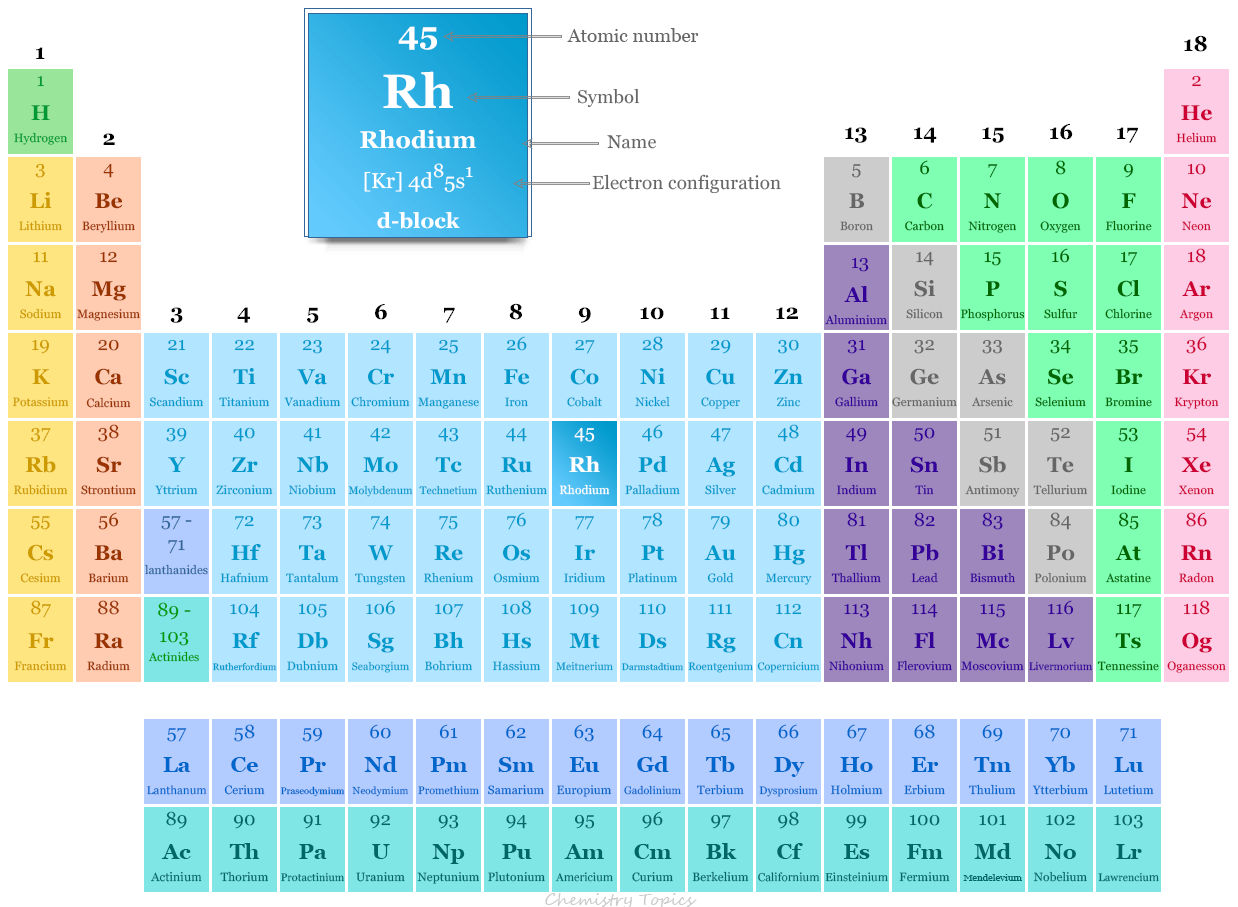 Industrial extraction is complex because rhodium-bearing ores are mixed with other metals such as palladium, silver, platinum, and gold. It is found in platinum ores and extracted as a white inert rhodium metal.

The refining of rhodium from other platinum metals is given below,

In addition to the noble character and catalytic behavior, platinum metals have several common features in their chemistry. All of them form a wide variety of binary compounds like oxides, sulfides, and specially halides.

As compared with the previous pair of heavy transition elements, Rh and Ir have a lower tendency to attain higher oxidation states. Though the highest state found is VI and the most stable state for Rh is III.

Rhodium has only a few compounds in oxidation state IV. On heating air, Rh forms Rh2O3. The oxide RhO2 can be made by strong oxidation of Rh (III) in an alkaline solution and dehydrating under high pressure.

In oxidation state III, the element form oxide, halide, and many complex compounds. Dark gray Rh2O3 is formed by heating Rh metal in oxygen at 600 °C. Rhodium (III) oxide has a corundum structure.

Except iodide Rh trihalides may be prepared by direct reaction of metal with halogens like chlorine, fluorine, and bromine. RhI3 is obtained by adding aqueous KI to the tribromide.

They are red or red-brown solid except RhI3 is black. The anhydrous trihalides are usually insoluble in water but water-soluble hydrates may be prepared by dissolving the hydrous oxide in appropriate HX (X = F, Cl, Br, I).

Rh2O3, xH2O dissolve in acids to form yellow Rh(H2O)6+3 ion. It forms alums that are structurally similar to those of Co(H2O)6+3 but more stable to reduction.

Generally, the complexes of Rh (III) are octahedral. The octahedral complexes are formed by ligands like water and ammonia.

The oxidation state II is not common for Rh and no established oxide or halide is known in this state. Complexes like [Rh(dipy)2Cl]+ and [Ph3PRh(OCOCH3)2]2 are known. The dimeric acetate of Rh (II) is obtained by heating RhCl3.3H2O with a methanolic solution of sodium acetate.

The uses of rhodium metal significantly influence by its rarity in appearance and high price. The most common uses of this metal are given below,

Today, the majority of car manufacturers use this metal as a catalytic converter to minimize pollution. Therefore, the price of rhodium metal very much depends on the demand from the automotive industry.

It is a useful chemical catalyst for making nitric acid from ammonia and acetic acid from methanol. Rhodium catalyst is used to catalyze hydrosilanes to manufacture certain silicone rubbers. The catalyst is also used to reduce benzene to cyclohexane.

The phosphine complexes of metal are used as a catalyst in hydrogenation and hydroformylation reactions. It is preferable to other platinum metals for the reduction of nitrogen oxides to nitrogen and oxygen.

It is also the most common use of metal. Rhodium is used for making flat-panel glass and fiberglass.

The rarer metal rhodium is the whitest and most precious metal used for jewelry. Rhodium plated on white gold and platinum gives a reflective white surface at a time to sell the jewelry. When coated with a thin layer, it gives extra strength and luster.

It may also be used for coating silver to protect against tarnish or protect silver from atmospheric hydrogen sulfide.

Rhodium-plated jewelry provides an extra layer of protection to jewelry. It also produces a brighter white than sterling silver, white gold, or platinum. Rhodium plating does not scratch, dent, or corrode the jewelry which we want to sell.

Rhodium is used in the catalytic converter of every new car produced today. Therefore, the value of rhodium very much depends on the demand from the automotive industry. The price of the metal can also be affected by the level of supply from the main exporter South Africa and Russia.

The price of rhodium was less than $1,000 per ounce in late 2013 due to various Political and financial problems or small demand for metal in the automotive industry.

What is europium? Europium is a chemical element or rare earth metal in the periodic table with the symbol Eu and atomic number 63. It...