Ruthenium is a group 8 chemical element or metal in the periodic table with the symbol Ru and atomic number 44. It is a hard white metal that is a member of the platinum group metals (PGMs). Ruthenium metal is the rarest transition metal on the earth that imparts hardness to platinum and palladium. 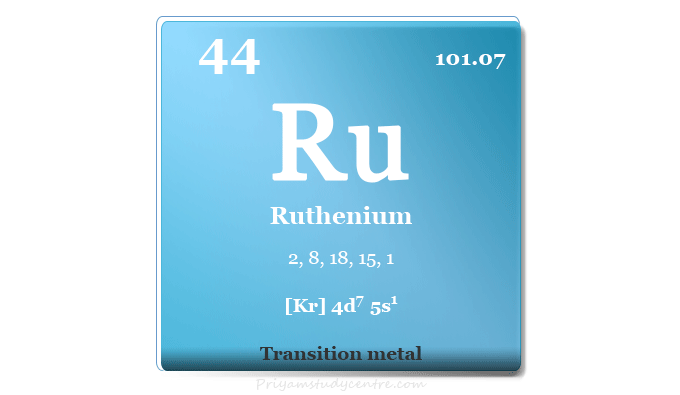 The demand and price for ruthenium are rising due to the widespread use of metal in the electronic and chemical industries. In these two industries, it is used mainly for making electrical contacts and anodes for chlorine production in electrochemical cells. It is also used in solar technology for the production of electrical energy from solar energy.

Ruthenium was discovered in 1844 by Russian scientist of Baltic-German ancestry Karl Ernst Claus. The name of the metal was given in honor of the country Russia.

Where is ruthenium found?

Ruthenium is one of the rarest metals on Earth that is generally found in ores of other platinum metals in the Ural Mountains and in North and South America. The chief source of the metal is found in South Africa, Canada, Russia, Brazil, Columbia, etc.

It is the 78th most abundant element in Earth’s crust that is found in the uncombined form in nature. Commercially, it can be extracted from the wastes of nickel refining.

The abundance of platinum metals in the earth’s crust is 0.01 ppm or less. Ruthenium is relatively rare on earth and found in about 100 parts per trillion. Mostly, the element occurs in the minerals pentlandite and pyroxinite.

The primary radioactive decay mode of these isotopes is electron capture and beta emission. The primary decay product of radioisotopes is technetium and rhodium.

The concentration of ruthenium is relatively high during the fission of nuclear power reactors. Therefore, most long-lived Ru-106 may also be extracted from radioactive waste. The isotope Ru-106 is found during the nuclear fission of uranium or plutonium.

Ruthenium is obtained commercially as a by-product from nickel, copper, and platinum metals ore refining. During the electrorefining of copper and nickel, noble metals such as silver, gold, and the platinum group metals precipitate as anode sludge.

The refining of ruthenium and other platinum metals from the anode sludge is given below,

Ruthenium is a hard, brittle, silvery-white transition metal that does not react normally with acids, water, or air. It belongs to the noble metals or platinum metals family in the periodic table.

The 44 electrons in the ruthenium atom are distributed in different energy levels to show the following electron configuration given below the picture, 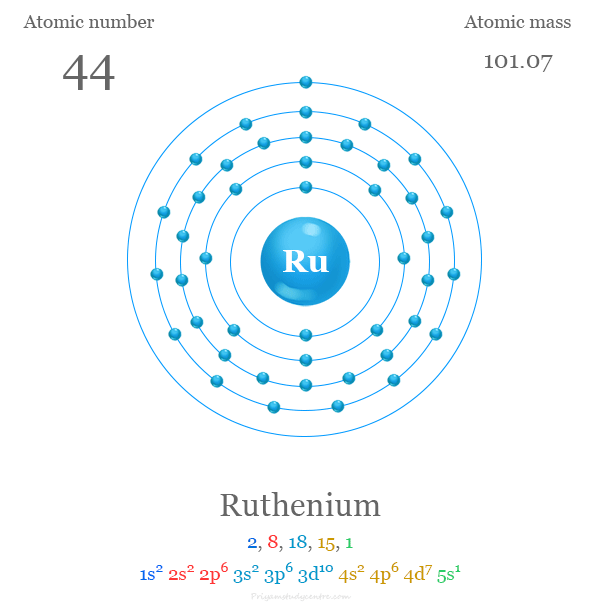 Ruthenium in the periodic table

Ruthenium is placed in group 8 and period 5 in the periodic table. It is a d-block element or transition metal that lies between technetium and rhodium. 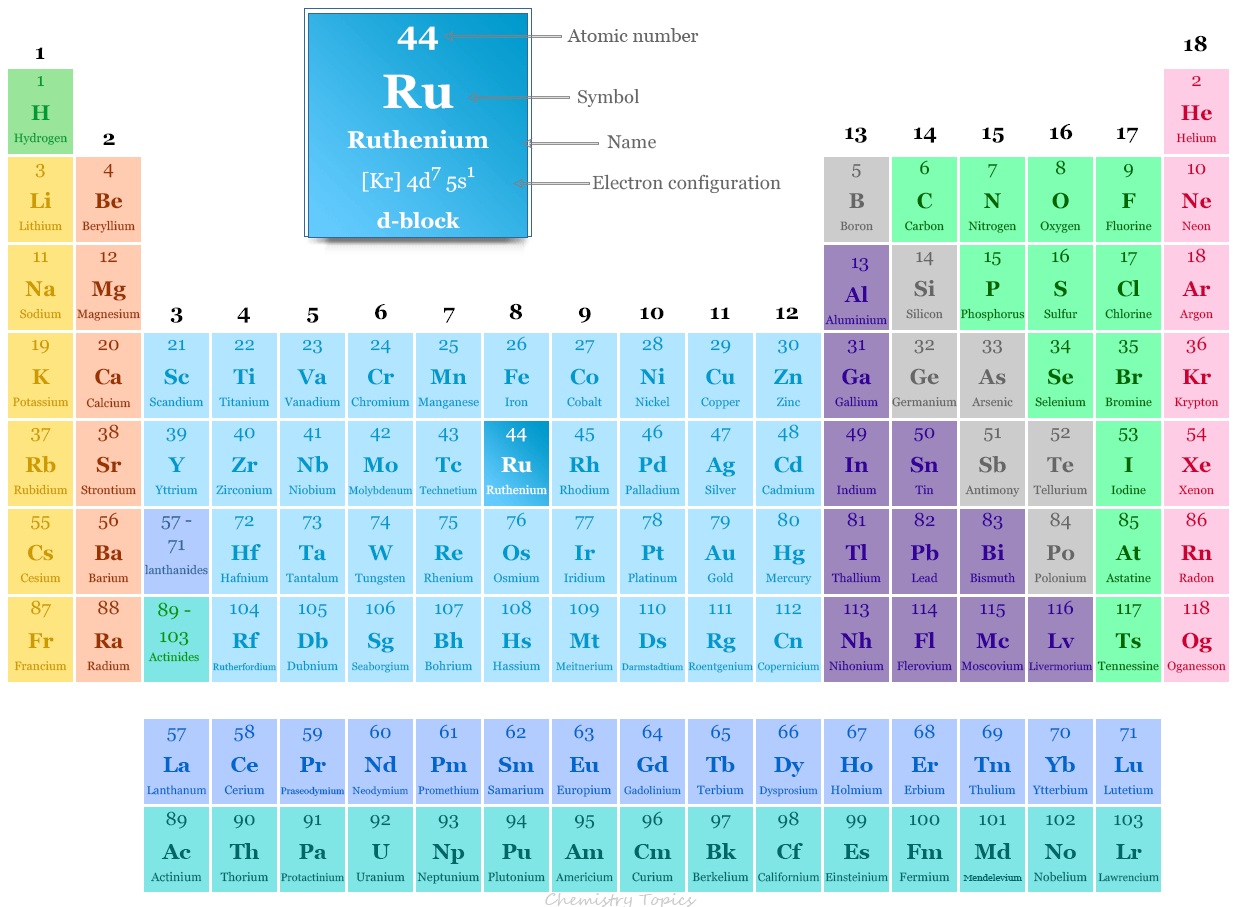 The platinum or noble metal ruthenium is quite unreactive. The metal shows the highest observed oxidation state VIII but VI and IV states of metal are also very stable.

It forms a wide range of chemical compounds in various oxidation states. The most common oxides, fluorides, and complexes of ruthenium in +4 and +6 oxidation states are given below,

The oxidation states IV and VI of Ru are quite stable. It burns in the air directly to form blue-black ruthenium dioxide with the chemical formula RuO2. The dioxide is a stable solid with a rutile structure and insoluble in water.

The volatile orange-yellow ruthenium tetroxide (RuO4) is formed by oxidation of Ru (VI) in an acid solution with KBrO3, KMnO4, Cl2, etc. The molecule contains a regular tetrahedral structure with an ozone-like odor. It is a strong oxidizing agent that dissolves in alkali by evolving oxygen gas.

The hexafluoride and tetrafluoride form of ruthenium is common. The brown colour hexafluoride (RuF6) is obtained by the reaction of Ru with fluorine under pressure and quenching the vapour.

It formed yellow RuF4 when RuF5 is reduced by iodine. RuF5 is a normal product of the reaction between Ru and fluorine. Probably the tetrafluoride compound is polymeric in nature.

In lower oxidation states the metal forms a variety of coordination complexes. There are a few simple compounds observed in the +2 state of the metal. It formed numerous complexes with amine and arsine. These complexes are formed by the reduction of ruthenium metal in presence of ligands.

Reduction of RuCl3 with hydrazine or zinc amalgam in presence of ammonia gives dinitrogen complex [Ru(NH3)5N2]+. It is the first compound reported to contain a coordinated nitrogen molecule.

It is used widely in the electrical industry because the properties of ruthenium are similar to that of rhodium but the price of the Ru is lower than rhodium.

The ruthenium plate is used in electrical contact and electrode base metal electroplating or sputtering. The average price of pure ruthenium metal is around $1400 per 100 grams.

What is cerium? Cerium is a chemical element or rare earth metal in the periodic table with the symbol Ce and atomic number 58. It...