Samarium is a chemical element or rare earth metal in the periodic table with the symbol Sm and atomic number 62. It is a soft, ductile, and silvery-white rare earth metal that lies with f-block elements or lanthanides. The density and hardness of samarium are similar to that of zinc. 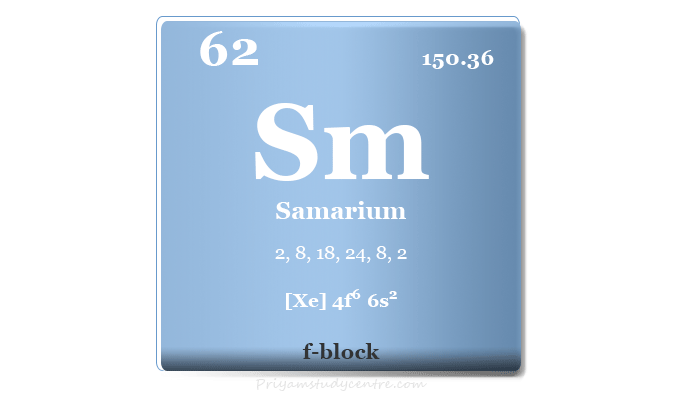 Like neodymium, it is alloyed with cobalt to form samarium-cobalt magnets. It is also used in X-ray lasers, glasses, a catalyst for alcohol production, nuclear medicine, and an absorber in nuclear power reactors.

The radioactive isotope samarium-153 is an active component of radioactive medicine. In medicinal chemistry, Sm-153 is used for the treatment of lung cancer, prostate cancer, breast cancer, and osteosarcoma.

Another isotope, samarium-149 is a strong neutron absorber. Therefore, it is added to the control rods of nuclear power reactors.

Where is samarium found?

The most abundant commercial source of samarium is China, India, Brazil, the US, Australia, and Sri Lanka.

It can be separated from the other rare earth metals by ion exchange chromatography and solvent extraction method. Recently, the electrochemical deposition technique has been used to separate samarium from other lanthanides.

The radioactive isotope, Sm-153 is used to kill cancer cells in the lungs, prostate, breast, and osteosarcoma. Another isotope, Sm-149 is used as a strong neutron absorber in control rods of nuclear reactors.

Samarium is a silvery white rare earth metal belonging to the lanthanide family of the periodic table. It is relatively stable at room temperature but ignites when heated at 150 °C. It forms an oxide layer in moist air.

Like rare earth metal europium, samarium has also shown a stable +2 oxidation state along with a +3 state. 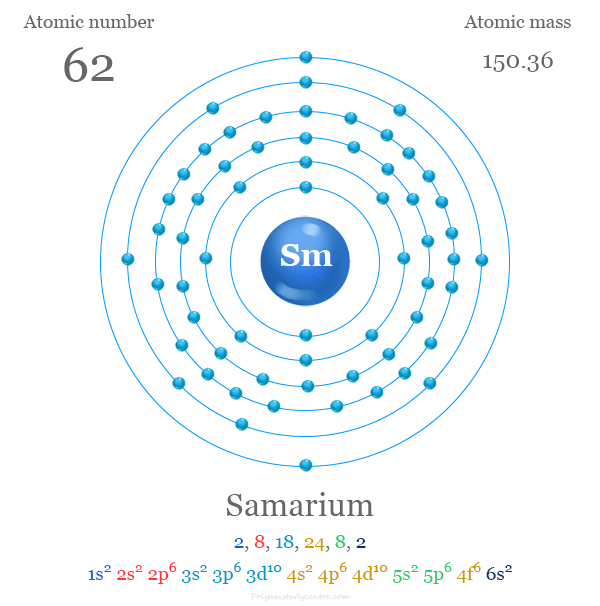 The 62 electrons of the samarium are arranged to show the electron configuration of [Xe] 4f6 6s2. Like europium, Sm commonly uses two or three valence electrons to show +2 or +3 oxidation numbers or states.

Samarium in the periodic table

It is placed with lanthanide in the periodic table. Samarium is a costly rare earth metal that lies between promethium and europium. 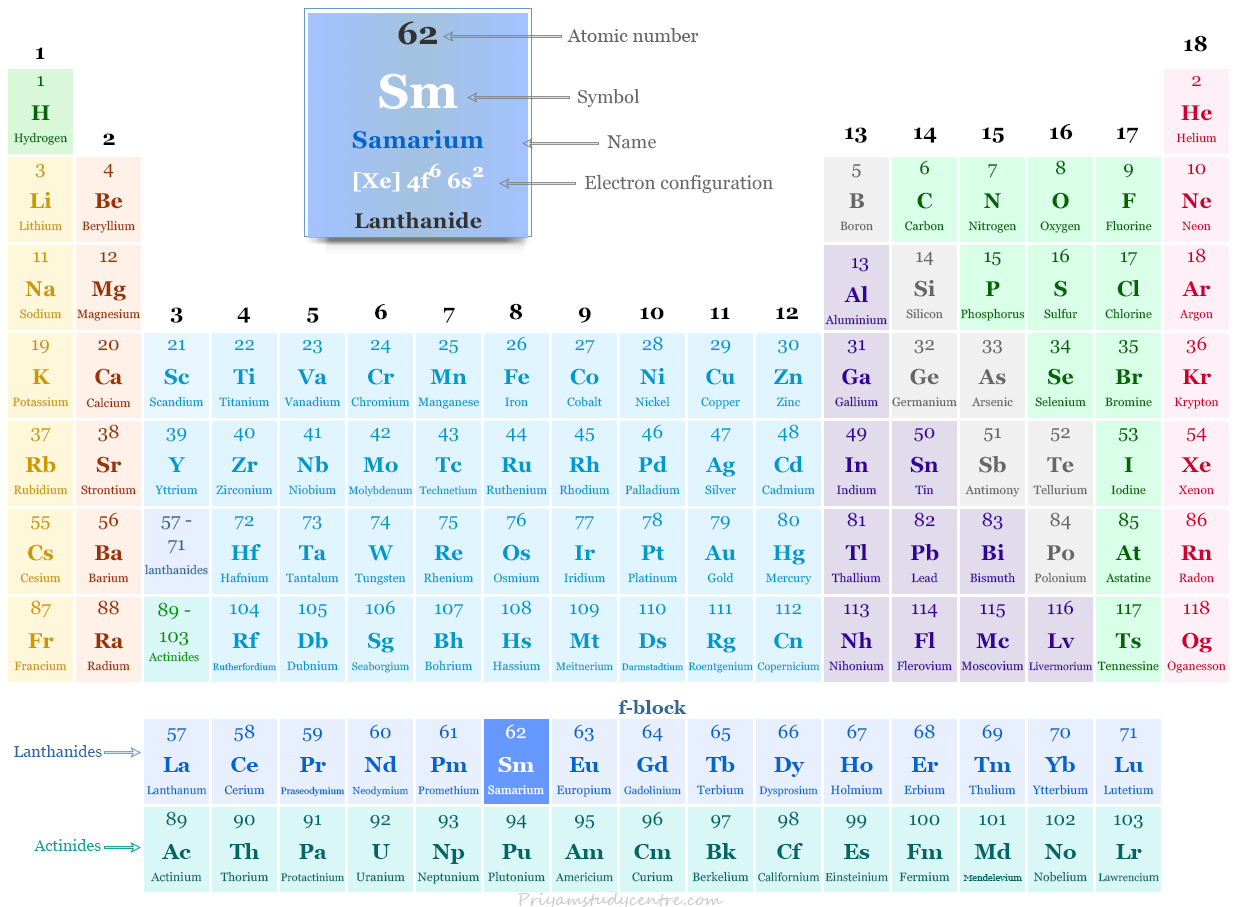 Samarium is a highly electropositive and active metal. The electrode potential value of Sm is comparable to that of alkaline earth metals. It acts as a strong reducing agent.

The compact rare earth metal is quite stable to dry air at ordinary temperatures but rapidly dull in a humid atmosphere. Samarium metal tarnishes slowly in the air by forming an oxide layer.

It is one of the few lanthanides that shows an oxidation state of +2 along with a +3 state. The aqueous solution Sm2+ ions show blood-red colour.

The most common and stable oxide of Sm is Sm2O3. Samarium metal also formed monoxide with the chemical formula SmO. The metal tarnishes readily in the humid air by forming an Sm (III) oxide layer.

It is also obtained by thermal decomposition of samarium (III) carbonate, hydroxide, nitrate, oxalate, or sulfate.

Sm2O3 is commonly white to off-yellow in colour that used in optical and infrared absorbing glass to absorb infrared radiation. It is also used as a neutron absorber in control rods of nuclear power reactors.

It is potentially used in electronics, optics, and catalysis.

The metal Sm reacts with all the halogens like fluorine, chlorine, bromine, and iodine to form trihalides.

It is used widely for making samarium-cobalt magnets. It may also be used in various catalysis processes, absorbers in nuclear reactors, medicine for cancer treatment, making glasses, etc.

It is used for making samarium-cobalt magnets with the chemical formula SmCo5 or Sm2Co17. Such types of magnets are much more powerful than iron magnets.

Samarium-cobalt magnets are used commonly in small motors, headphones, and high-end magnetic pickups for guitars and related musical instruments. Presently, due to the high price of Sm, these magnets are replaced by neodymium magnets.

It is suitable only for high-temperature applications. They show magnetic properties at high temperatures. Therefore, these magnets are used in microwaves.

Samarium and its compounds are very useful in catalysis processes.

In quadramet medication, Sm-153 is chelated with ethylene diamine tetramethylene phosphonate (EDTMP) and injected intravenously. The chelation prevents the accumulation of radioactive samarium in our body but beta radiation can kill cancer cells of lung cancer, prostate cancer, breast cancer, and osteosarcoma.

Samarium-149 has a high cross-section for neutron capture. Therefore, it is used in control rods of nuclear reactors due to the stability of absorption compared to other materials such as boron and cadmium. Most of the nuclear fusion and decay products of 149Sm are other isotopes of samarium and are also good neutron absorbers.